Posted on November 12, 2014 by LighterThanAirSociety 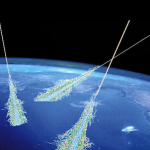 Right now, somewhere in the Milky Way, a proton is traveling though supernova remnant shock waves, bouncing around in extreme magnetic fields and gaining energy and speed. Eventually the proton will gain enough energy to escape the remnant and travel through the galaxy. It might even head to Earth! If we are lucky, it will crash into our atmosphere, creating a shower of millions of particles, just waiting to be detected by a large balloon that will soon be launched over Antarctica.

The views expressed are those of the author and are not necessarily those of Scientific American. 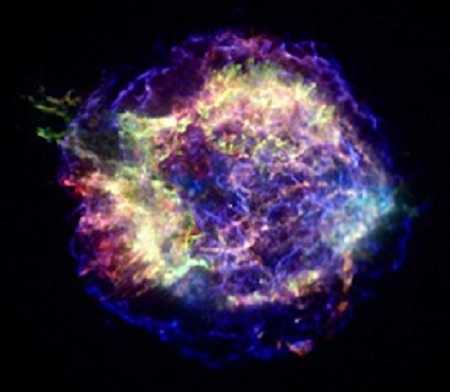 Information about high-energy cosmic rays and neutrinos sheds light on what are now mysterious processes in the universe. What natural phenomenon can produce such energetic particles? Where are they geographically located? How many high-energy particles can we see? This information will lead to the next generation of high-energy astroparticle physics.

Neutrinos and cosmic rays travel through the universe at incredible speeds. Neutrinos are fundamental particles in nature, and part of the Standard Model of particle physics. The name neutrino means “neutral little one.” As the name suggests, neutrinos have no charge, and so they are hard to detect.   Cosmic rays are charged particles, commonly protons or other atomic nuclei, that are very energetic and travel at speeds close to the speed of light. Cosmic rays are the most energetic particles ever observed (far greater in energy than anything that can be produced in particle accelerators) and they should produce nearly as energetic neutrinos by interacting with the light left over from the Big Bang—the cosmic microwave background (CMB). We are talking about energies in the 1019 electron-volt range and higher! It is almost impossible to grasp what energies this high really mean. The visible light we see tends to be on the order of 1 electron volt. A 1019 electron-volt proton has the same energy as a baseball thrown at 60 miles per hour! 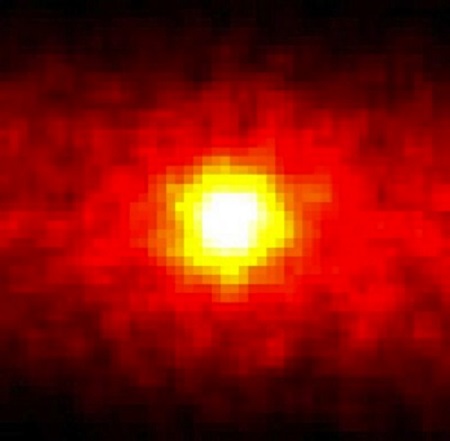 These particles have to undergo extreme acceleration to achieve these energies. Sources of lower energy neutrinos and cosmic rays are fairly well known. Our sun, for example, produces many lower energy neutrinos via nuclear fusion. We don’t think too much about neutrinos on a daily basis, but in fact, 65 billion neutrinos pass through your fingernail every second! Since low energy cosmic rays and neutrinos are more abundant, scientists have a better grasp of their sources and composition.

High-energy neutrinos and cosmic rays pose a larger problem. The origin of high-energy neutrinos and cosmic rays is unknown, and more information about these particles will shed light on the most energetic processes in the universe: supernovae, active galactic nuclei, gamma ray bursts, etc. The problem is that they are much rarer than their lower energy counterparts, and so very difficult to detect.  In order to detect these particles you either need a telescope with a huge detection area or a huge amount of detection time, or both. 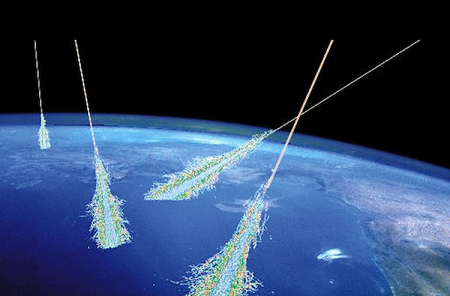 When cosmic rays enter the atmosphere they interact with particles in the atmosphere, creating particle cascades, aka “air showers” (see above figure). A similar phenomenon happens when high-energy neutrinos pass through a dense material such as ice. The cascade development generates electromagnetic radiation that can be seen in many wavelengths, including the optical and radio spectrums.

Detectors tuned for specific wavelengths can be used to detect cosmic ray air showers with radiation from different parts of the electromagnetic spectrum. Enter ANITA, an instrument consisting of 48 antennas arranged on a balloon payload to scan the entire continent of Antarctica for radio signals that come from neutrinos interacting in the ice, as well as cosmic rays interacting in the atmosphere and reflecting off the ice. Large detection areas are very hard to build, so we use what nature gave us – a huge sheet of ice, perfect radio detection! 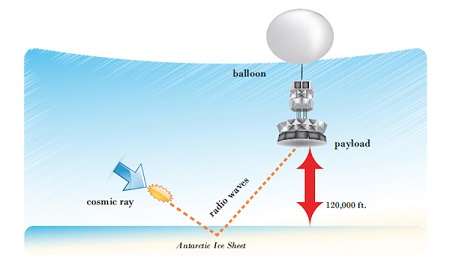 There have been two ANITA flights so far. Both have detected cosmic rays and have been important for neutrino research. This all leads to ANITA III, which was assembled for the first time last summer at a NASA balloon facility in Palestine, Texas (where the climate was very different from ANITA’s final destination). Scientists worked for two months to build and test this experiment, which has been years in the making. In order to proceed, the instrument had to pass two tests. The first test was to make sure the payload wouldn’t fall apart under its own weight, nearly 2.5 tons! The second was to ensure that scientists on the ground could communicate with the instrument while it is flying around Antarctica. The instrument passed both crucial tests in late August. 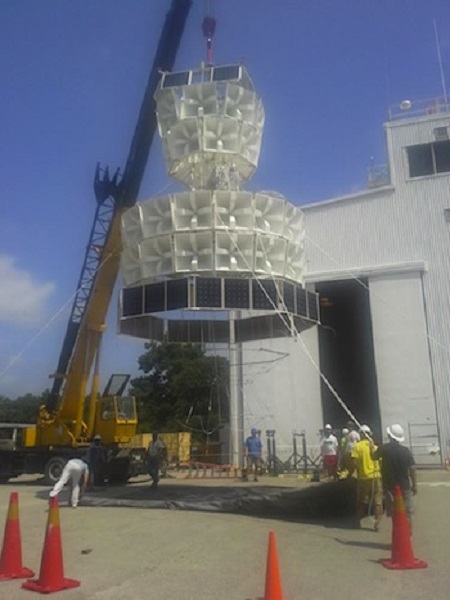 The ANITA instrument. Those white things are the antennas.
Credit: K. Mulrey.

So what happens next? We take it all apart: the 30-foot-high gondola structure that houses 48 antennas, the communication equipment, loads of cabling and the “instrument box” (the heart of ANITA that processes and records the data). Everything is put in huge shipping containers and sent south to Antarctica, where we will meet it in late October when the austral summer begins.

What do we expect to see? Seeing any neutrinos would definitely be awesome. Two things are happening in the high-energy neutrino world: experiments are becoming more sensitive and models are getting better. ANITA’s goal is to bridge the gap between experiment and theory. Models put a limit on the number of neutrinos we can expect to see. If we don’t see any within that limit it means the models may need to be changed. In that sense, any news will be good news. If we see neutrinos, we can confirm and tweak the models. If we don’t, we can put constraints on model. Cosmic rays, however, are expected to be bountiful. 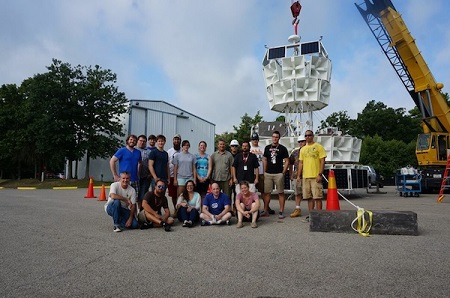 That’s ANITA in a nutshell. As we assemble the instrument we will dig into the nitty-gritty details. In the meantime, the first wave of collaborators are boarding planes for the 20-plus hour flights to Christchurch, New Zealand. The city houses the Antarctic Clothing Distribution Center where you pick up all your winter weather gear, including huge boots, that notorious red jacket, wind pants, hats, gloves and more. It is also the best place to fly to the side of the continent where McMurdo Station is located.

See you in the south!

Editor’s Note: Welcome to ANITA, the Antarctic Impulsive Transient Antenna! From October to December, Katie Mulrey is traveling with the ANITA collaboration to Antarctica to build and launch ANITA III, a scientific balloon that uses the entire continent of Antarctica for neutrino and cosmic ray detection.