Posted on December 10, 2013 by LighterThanAirSociety 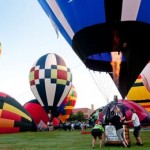 Longview will be home to the Balloon Federation of America’s U.S. National Championship for a fourth year, officials with the Great Texas Balloon Race announced Monday.

The championship has completed the second of an originally three-year stint in conjunction with Longview’s race, but local balloonists submitted a bid to host the event for a fourth year, which has been accepted by the national organization with contracts forthcoming.

“I am beyond pleased with the extra year for the Hot Air Balloon National Championship, 2015, which has been granted to us by the Balloon Federation of America,” said Bill Bussey, Great Texas Balloon Race founder and championship liaison. “The top winners of the 2014 and 2015 Nationals will make up the team that represents the United States at the World Championship in 2016. This is truly a dream come true for Longview. And we are very proud of the boost this provides to the local economy.” 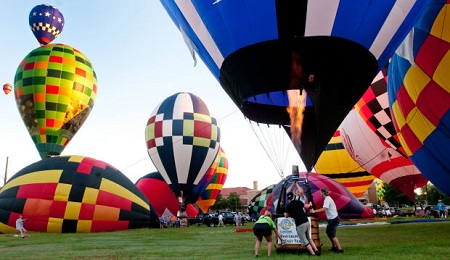 Pilot Kinnie Gibson of Carrollton prepares to take off during the first competing flight of the 2013 U.S. National Hot Air Balloon Championship Longview. Race officials have accepted a bid from the Great Texas Balloon Race to keep the competition in Longview for a year past the original contract.
Photo: Kevin Green/news-journal.com

Since 2012, each July balloons have soared over Longview for an entire week as the Great Texas Balloon Race and the national championship have run concurrently from the East Texas Regional Airport.

The Longview event began about 35 years ago with balloons launching from the parking lot of the Longview Mall.

The Balloon Federation of America considered letters of intent when they met last month in Ohio.

“The decision to return to Longview for an extra year was easy, the Great Texas Balloon Race has a proven track record of hosting first class competitive balloon events and over the course of the last two years they have proven quite well that they can organize and run our Federation’s premier competition event,” said Sam Parks, the president of the Federation.