Posted on March 7, 2011 by LighterThanAirSociety 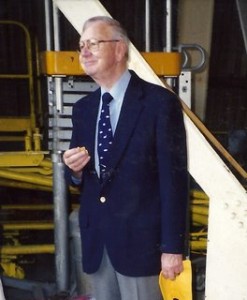 The Lighter-Than-Air Society has awarded its “P. Rendall Brown Lifetime Achievement Award” to James R. Shock for his work to preserve the history of airships.

James R. Shock, an LTAS Honorary Board Member and airship historian, was born in Cleveland and raised in Sandusky, Ohio. Fascinated by the airships he saw flying over the north coast, he began accumulating airship data while still in high school and continued collecting except for three years of army service during World War II.

Jim served as a machine gunner in Europe and then in the occupation of Japan. He was awarded two bronze stars for meritorious service in operations against an armed enemy while in Europe.

After graduating from the Ohio State University with a degree in Civil Engineering, he was employed by General Motors’ Cadillac Division in Cleveland and then by Chevrolet at the General Motors Technical Center in Michigan. He retired as a manager of engineering facilities after more than thirty-nine years of service, and, with his wife Pat, relocated to suburban Cincinnati.

With David Smith, he updated The Goodyear Airships in 2002. James Shock also appeared on television programs as an expert on airships and airship hangars.