Posted on December 10, 2011 by LighterThanAirSociety 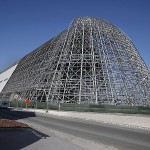 Hangar One, once home to the Navy’s giant airships at Moffett Field, finally has a few willing benefactors: Google’s top three executives have offered to salvage the historic landmark. NASA’s response — we’re thinking about it.

Larry Page, Sergey Brin and Eric Schmidt — the CEO, co-founder and executive chairman of the Web search giant, respectively — have, through a company they control, proposed paying the full $33 million cost of revamping the iconic hangar. But there’s a catch: They want to use up to two-thirds of the floor space of the hangar to house their fleet of eight private jets. 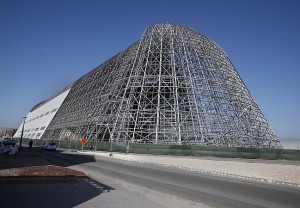 This is a view of Hangar One at Moffett Field on Wednesday, Dec. 7, 2011. As Hangar One continues to be stripped of its PCB-laden paneling, a company controlled by Google's founders has stepped forward to announce it will fund 100 percent of the work to preserve the historic structure. (Karen T. Borchers/Mercury News)

The three made the proposal in September, and it was received positively by NASA Ames, which owns Hangar One and Moffett Field, on which it sits, said Ken Ambrose, director of operations for H211. The company is owned by the Google leaders and operates their airplanes, one of which is being sold. But H211 hasn’t received a response from NASA’s administrators in Washington, D.C., said Ambrose, who publicly announced the proposal at a Thursday meeting of the Hangar One Subcommittee of the Moffett Field Restoration Advisory Board.

“A decision should have been made by now,” Ambrose said at the meeting. “It’s quarter to midnight as far as I can see.”

Ambrose and supporters of Hangar One’s restoration are eager for a response because the Navy is in the process of removing the old, contaminated skin from the giant building. That work should be completed by next summer, said Lenny Siegel, chairman of the subcommittee. 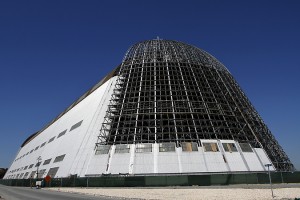 Hangar One, which is being dismantled, is shown at Moffett Field in Mountain View on Thursday, Aug. 25, 2011. (Kirstina Sangsahachart/ Daily News)

Without a covering, the hangar’s frame and foundation will be exposed to the elements. That’s a problem because there are toxic materials in the soil underneath the hangar that could leach out because of rain exposure, Siegel said. Additionally, the Navy has set up some $12 million worth of scaffolding to remove the hangar’s skin. If supporters are able to put a new covering on the hangar right after that process ends, that scaffolding can be left in place. If not, it will have to be removed and then replaced later at a cost of some $1 million to $2 million more, Siegel said.

But to get the project ready to start in the summer, Ambrose said he needs immediate approval so he can start lining up consultants, building permits and materials.

“We don’t want to spend the next six months working hard to come up with a definitive plan if in fact that dog won’t hunt,” Ambrose said. “Months have gone by, and I feel a real sense of urgency with the (hangar’s) bones being exposed.” 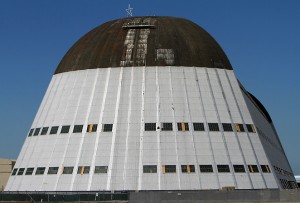 Hangar One is pictured at Moffett Field in Mountain View on Tuesday, May 3, 2011. The Navy recently announced it will not be able to save the historic structureÕs windows as it proceeds with the removal of its toxin-laced roof and side panels. (Kirstina Sangsahachart/ Daily News)

Bob Jacobs, a NASA spokesman, said in an email Satgurday that “it would be premature to discuss the merits of the proposal until we have had time to review the details. It has not yet been completely vetted,” he added. “We understand the interest and historic nature of the facility and we have to weigh that against the reality of constrained resources and use. We are giving all options thoughtful consideration as we prepare our funding proposal for the Fiscal Year 2013 budget.”

H211’s proposal has picked up support in other quarters of Washington. On Friday, Rep. Anna Eshoo, D-Palo Alto, sent a letter to NASA Administrator Charlie Bolden saying that the proposal had merit and urged Bolden to consider it.

“A public-private partnership could avoid both significant taxpayer costs and the irreversible demolition of this historic landmark,” Eshoo said in a letter that was signed by 20 other House of Representatives members, including many of the Bay Area delegation. 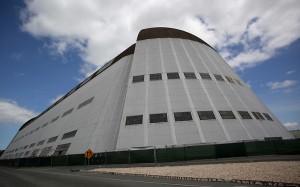 Under H211’s plan, NASA would remain the hangar’s owner and would be able to lease out not only the floor space that H211 didn’t use but also upper levels of the building, Ambrose said. Supporters of the hangar have floated ideas for its use, such as a Smithsonian of the West and a new home for Moffett Field’s museum. H211 wouldn’t cover the cost of improving the hangar for those types of uses, he said, but added that there will be plenty of room for them, even with the amount of space H211 is requesting. “You could put a Walmart in there,” he said.

Subcommittee members were mostly elated by the proposal, and one attendee called it “noble.” Committee members generally agreed that H211’s offer should give their preservation efforts significant weight, though one member worried aloud that some may object to the loose ties to Google. 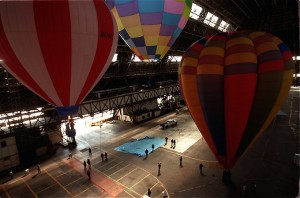 Seven hot-air balloons floated in Hangar One at Moffett Air Field for the annual safety meeting of the Pacific Coast Aeronauts, concentrating on procedures and some emergency drills. Photo: Luci S Houston

“We don’t want to see ‘Google’ in 200-foot letters on that hangar,” Steve Williams, of the Save Hangar One Committee, said. Ambrose said Google’s brass did not want that, either.

The 198-foot-tall Naval Historical Monument, built in 1933, has faced a number of challenges, especially in the past year, when the House of Representatives removed $32 million from NASA’s budget that was set aside to replace the siding. The “de-skinning” of the structure began in the spring with removal of the corrugated metal walls tainted by lead paint, asbestos and PCBs. 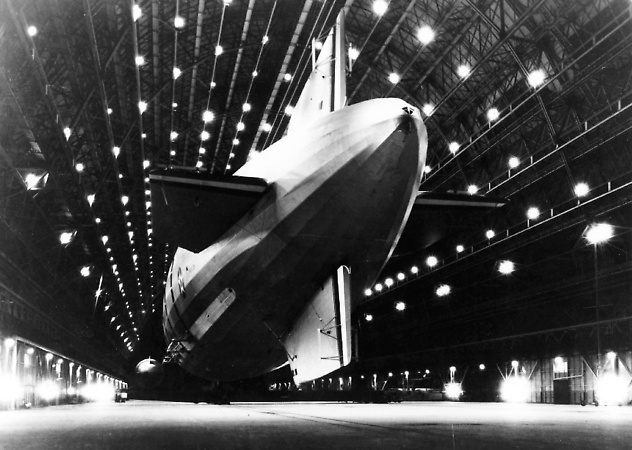 This is an undated file photograph of the airship USS Macon in Hangar One at Moffett Federal Airfield near Mountain View, Calif. (AP Photo/U.S. Navy) 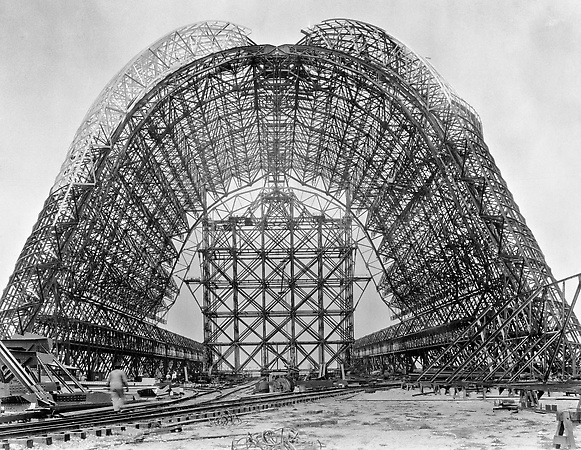 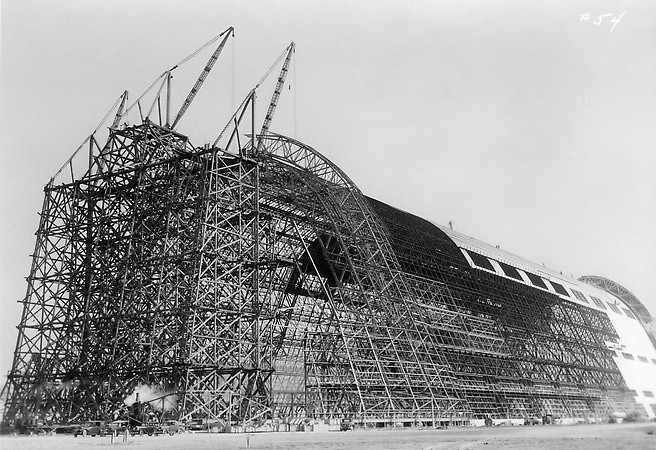 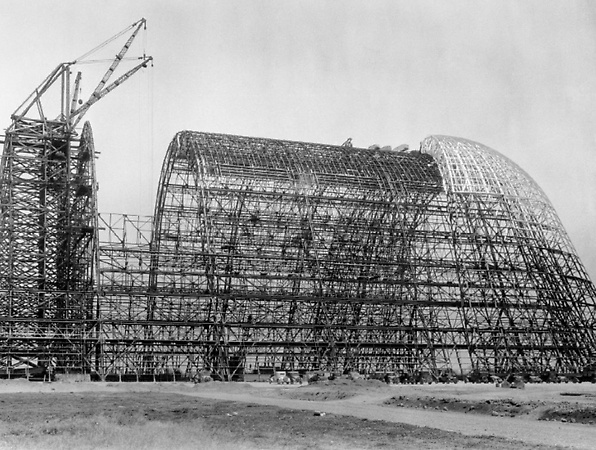 The Moffett Field Hangar One as it appeared when it was under construction. Critics are panning the U.S. Navy's plan to remove the metallic panels covering the skeleton. Courtesy U.S. Navy