Posted on March 5, 2011 by LighterThanAirSociety

from the Express and Star 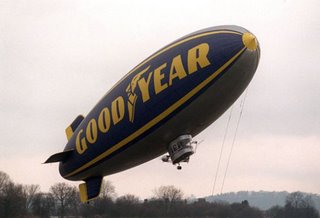 The giant Goodyear Blimp is all set to return to the skies over the West Midlands for the first time in more than a decade — complete with a road safety message.

Goodyear airships, more commonly known as ‘blimps’, have graced the skies for more than 85 years and used to be a familiar sight across  the region, when they were based at

Halfpenny Green Airport,  just west of Wolverhampton. They remain icons for the brand — but have not been flown in the UK or in the rest of Europe since 1999.

One will begin a UK tour later this month — and will again be based at Halfpenny Green for the Midland leg,  in the first two weeks of April.

Goodyear Dunlop’s European president Arthur de Bok confirmed at the Geneva Motor Show that the blimps were being brought back to promote a road safety message.

He said the firm’s market research suggested that too many motorists lacked vital knowledge about road safety.

The new UK airship has been constructed at Bedford and, at around 150ft in length, will be smaller than the monster 200ft blimps that the firm continues to use in the US.

Power to manouevre the giant airship comes from a pair of VW Beetle engines, while the familiar blue and yellow Goodyear livery has to be laboriously attached to the outer layer of the blimp using A4-sized pieces of material. Once complete it takes the best part of a week to fill with helium.

The UK blimp will be have a crew of two and be able to accommodate up to three passengers.

Hugues Despres, Goodyear European brand director, said: “The Goodyear Blimp will take the lead on a number of road safety initiatives as it becomes the focal point for the firm’s consumer-based activities and events.”
Read more: http://www.expressandstar.com/news/2011/03/03/giant-goodyear-blimp-is-returning-to-skies/#ixzz1Fr66T6zi