Posted on April 1, 2013 by LighterThanAirSociety 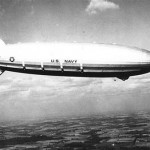 History buffs will gather this week near the New Jersey coast to commemorate a major airship disaster, but it’s not the one people are familiar with.

Newsreel footage and radio announcer Herbert Morrison’s plaintive cry, “Oh, the humanity!” made the 1937 explosion of Germany’s Hindenburg at the Lakehurst Naval Air Station probably the best-known crash of an airship. 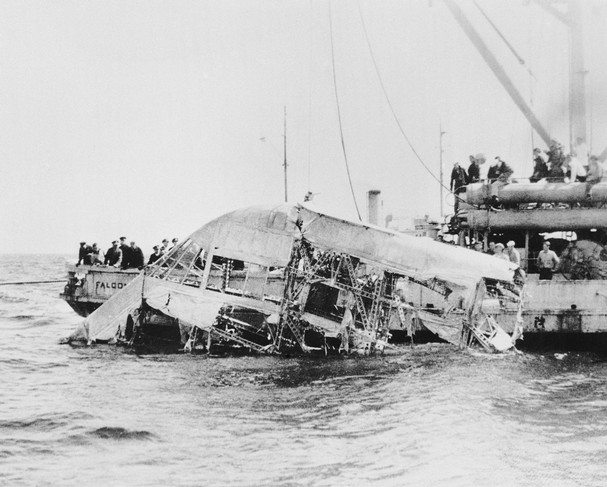 In this April 23, 1933, photograph, the wreckage of the naval dirigible USS Akron is brought to the surface of the ocean off the coast of New Jersey.
Photo: AP

But just four years earlier, a U.S. Navy airship seemingly jinxed from the start and later celebrated in song crashed only about 40 miles away, claiming more than twice as many lives.

The USS Akron, a 785-foot dirigible, was in its third year of flight when a violent storm sent it plunging tail-first into the Atlantic Ocean shortly after midnight on April 4, 1933.

“No broadcasters, no photographers, no big balls of fire, so who knew?” said Nick Rakoncza, a member of the Navy Lakehurst Historical Society. “Everybody thinks that the Hindenburg was the world’s greatest (airship) disaster. It was not.”

A ceremony to commemorate the 80th anniversary of the crash, the deadliest airship disaster on record, is being held Thursday at a veterans park where there is a tiny plaque dedicated to the victims. Below it is a small piece of metal from the airship.

Few in the area seemed to know about the disaster, let alone the memorial plaque; even a Navy officer sent on an underwater mission to explore the wreckage many years later had not heard of the Akron. 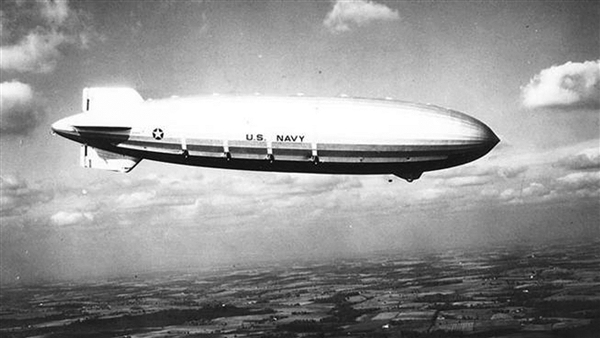 The Akron crashed off the community of Barnegat Light just a few hours after taking off from Lakehurst, killing 73 of the 76 men aboard, largely because the ship had no life vests and only one rubber raft, according to Navy records and the Navy Lakehurst Historical Society. They had been moved to another airship and were never replaced.

Lt. Cmdr. Herbert Wiley, Moody Erwin and Richard Deal were pulled from the frigid waters by a German tanker that had been nearby.

Erwin and Deal had been hanging on a fuel tank. Wiley was clinging to a board, according to an account he gave to a newspaper the next day.

In a newsreel interview, Wiley, standing next to the other survivors, said he was in the control car just before the crash. He said crew members could not see the ocean until they were about 300 feet above the water.

“The order was given to stand by for a crash,” Wiley said. “The ship hit the water within 30 seconds of that order and most of us, I believe, we catapulted into the water.”

Among the casualties was Rear Adm. William Moffett, the first chief of the Bureau of Navy Aeronautics.

When the wreckage was found, Zitarosa said, the airship had collapsed to about 25 feet in height. It had originally stood at about 150 feet.

“It was a catastrophic disintegration of the ship once it hit the water,” Zitarosa said.

Part of the wreckage was lifted from the sea a few weeks after the accident.

The Goodyear Tire & Rubber Co. in Akron, Ohio, had been awarded a Navy contract in 1928 to build the Akron and a second rigid airship, the Macon. Construction of the Akron by the Goodyear-Zeppelin Corp. was completed in 1931.

It was plagued by problems from the start.

It was involved in three accidents before its final flight, including one in which its tail slammed into the ground several times. Another accident killed two sailors. 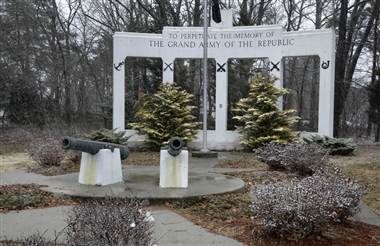 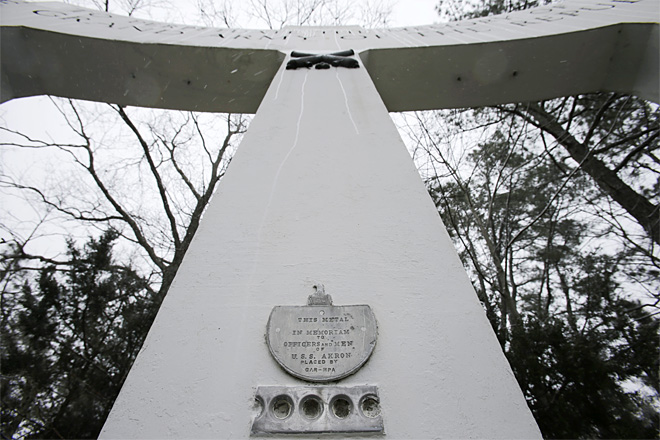 In this Thursday, March 21, 2013 photograph, a monument is seen at a small veteran’s memorial park in a neighborhood in Manchester Township, N.J. On the center column is a piece of the airship and a small plaque to the USS Akron airship that went down in a violent storm off the New Jersey coast. The disaster claimed 73 lives, more than twice as many as the crash of the Hindenburg four years later. The USS Akron, a 785-foot dirigible, was in its third year of flight when a violent storm sent it crashing tail-first into the Atlantic Ocean shortly after midnight on April 4, 1933.
AP Photo/Mel Evans, from KIMATV 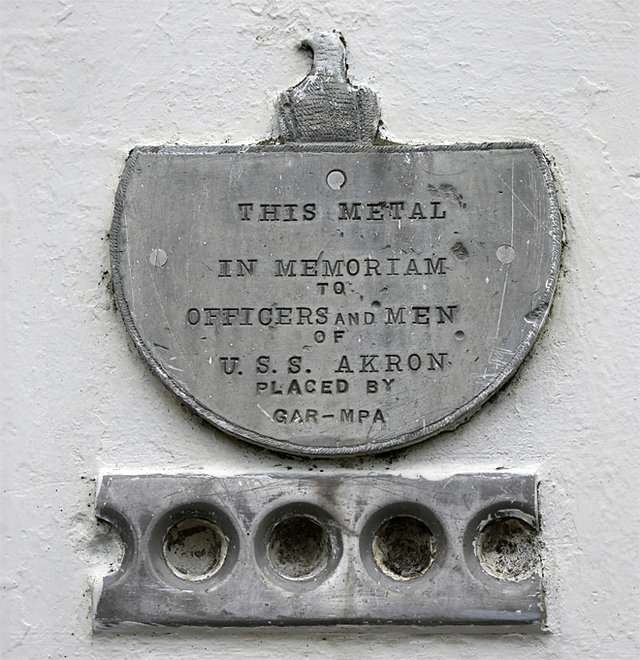 In this Thursday, March 21, 2013 photograph, a plaque and a piece of the USS Akron airship are seen at a small veteran’s memorial park in a neighborhood in Manchester Township. The USS Akron airship went down in a violent storm off the New Jersey coast. The disaster claimed 73 lives, more than twice as many as the crash of the Hindenburg, four years later. The USS Akron, a 785-foot dirigible, was in its third year of flight when a violent storm sent it crashing tail-first into the Atlantic Ocean shortly after midnight on April 4, 1933.
AP Photo/Mel Evans from KIMATV

Some men who died in the Akron had survived the airship crash of the USS Shenandoah less than a year before. [LTAS note: The USS Shenandoah actually crashed on September 2, 1925 – almost seven years earlier.]

A day after the Akron disaster, a blimp sent out to look for bodies malfunctioned and crashed in Barnegat Light, killing two more crew members.

A year later, Wiley was the commanding officer on the USS Macon when it was lost in a storm off of Port Sur, California, also killing two crew members. Wiley survived, but that was it for him and airships. [LTAS note: The USS Macon actually crashed on February 12, 1935 – almost two years later.]

In June 2002, the Navy ordered a mission to explore the wreckage of the Akron. The NR-1 explored several hundred feet of debris 120 feet deep.

The officer of the NR-1 at the time, Dennis McKelvey, said that they could not see much of the wreckage through murky waters, but that some metal along the ocean floor resembled “ribs sticking out of the mud.”

Even McKelvey, now a retired Navy captain, had not heard of the Akron disaster before he was dispatched to view the site.

“I had to go do my own research,” McKelvey said. “I thought I would have learned about it at some point.”