Posted on May 1, 2011 by LighterThanAirSociety 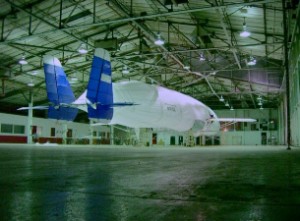 Ohio Airships taxi tested the improved Dynalifter Prototype this afternoon. The testing marks the first historic step to flight of the Dynalifter. The Dynalifter is a revolutionary type of hybrid aircraft, which is heavier than air, a cross between an airship and a traditional aircraft. The Dynalifter® simultaneously offers the great fuel efficiencies and short runway capabilities of historical airships, with the weather handling and concentrated payload capabilities of traditional airplanes.

The original Dynalifter was taken from Alliance Ohio to Toledo Express Airport in spring of 2009, where weight reduction steps were carried out taking advantage of the aircraft rebuild. After painstaking preparation by the Toledo volunteers, the crew now has made some “motors on” maneuvers, which tested the aircraft’s turning ratio and landing gear braking action. Unlike “lifting body “designs, the Dynalifter enjoys landing gear just like the common airplane.

The test was carried out by Ohio Airships’ test pilot Steve Fender of Toledo, who is a former USAF C-130 pilot who reported the test went flawlessly. The ground crew consisted of David Miller of Maumee, Ohio, John Haas of Toledo, Ohio, and Robert Rist of Mantua, Ohio. More tests are slated for later this spring.

In addition to these tests, the Dynalifter Group has had discussions with proven aircraft manufactures and airship cell manufactures. We have received proposals to start the building of the first larger prototype Dynalifter freight variants in three years. Dynalifter Group was formed to take advantage of various international and US investment groups who are combining to take advantage of quick commercial and humanitarian utilization.