Posted on June 28, 2013 by LighterThanAirSociety 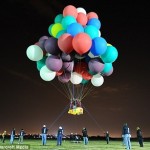 In the far northeast corner of the U.S., near the small town of Caribou, Maine, cluster-balloon pilot Jonathan Trappe is getting ready to fly his unusual lighter-than-air system across the Atlantic. 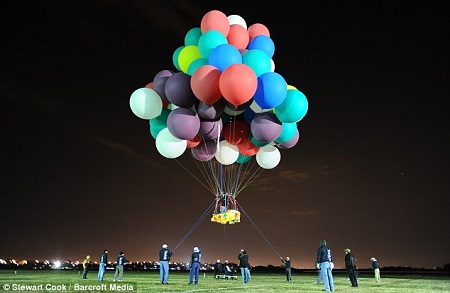 The adventurer begins to take off in his yellow rowing boat thanks to 365 helium-filled cluster balloons, each bigger than a person.
Photo: Stewart Cook/Barcroft Media on DailyMail.co.uk

He has put together a system of 370 small helium balloons, and he plans to fly in a small boat suspended beneath the cluster. He has acquired the helium he needs to inflate the system, and now will await favorable weather. “We are on-site and aim to be ready to fly anytime in July, August, or September,” Trappe posted on his Facebook page. Col. Joe Kittinger, who was the last pilot to launch from the U.S. and cross the Atlantic in a gas balloon, in 1984, has been helping with the expedition and plans to be in Maine for the launch, Trappe told AVweb in an email this week. 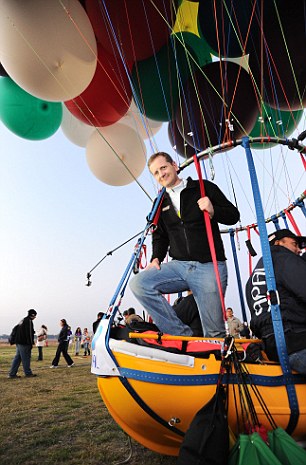 Jonathan Trappe poses in his cluster balloon craft before he took it out for a test run in Mexico
Photo: DailyMail.co.uk 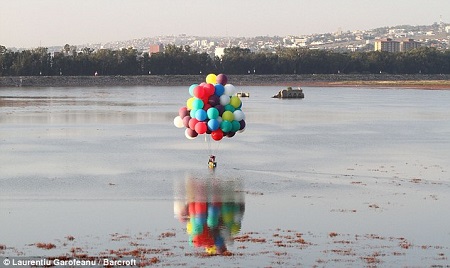 Jonathan Trappe and co-pilot Nidia Ramirez make sure the boat can land efficiently – done so by cutting away at some of the balloons.
Photo: Laurentiu Garroteanu/Barcroft on DailyMail.co.uk

Trappe has previously flown across the English Channel, and says on his website that he is well aware that this crossing will be challenging. “This is very serious; it is the great Atlantic Ocean,” he wrote. “Five people have lost their lives attempting to cross these waters in a balloon, and two non-pilots were lost into the oceans flying cluster balloons. I know this, and I work to methodically reduce the risk, so we can have a successful flight for a new generation.”

Volunteers who want to be on call to help with the launch can sign up at Trappe’s website. AVweb first ran across Trappe at EAA AirVenture in 2010; view the video: