Posted on August 14, 2012 by LighterThanAirSociety 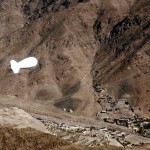 The U.S. military is joining with border-patrol officials in a new initiative that could bring dozens of surveillance blimps from the battlefields of Afghanistan to America’s border with Mexico.

Over the next few weeks, the military will oversee a test in south Texas to determine if a 72-foot-long, unmanned surveillance blimp—sometimes called “the floating eye” when used to spot insurgents in Afghanistan—can help find drug runners and people trying to cross illegally into the U.S.

The project is part of a broader attempt by U.S. officials to establish a high-tech surveillance network along the border and find alternative uses for expensive military hardware that will be coming back from Afghanistan, along with the troops. 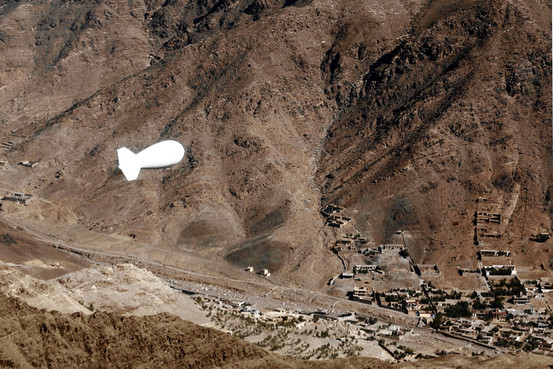 A U.S. military camera-equipped blimp flies over eastern Afghanistan in September 2011. Similar blimps are being tested along the U.S.-Mexico line.
Photo: Reuters

In addition to the blimps, border officials are exploring more than 100 other types of military gear, from hand-held instant-translation devices that could be used at crossings to sensors that can monitor up to a 10-mile diameter area for days at a time.

The Department of Homeland Security is taking a careful approach, wary of costly mistakes in past government attempts to set up electronic border surveillance.

Last year, the department pulled the plug on a billion-dollar initiative, known as SBInet, after concluding that the troubled “electronic fence” involving cameras, radar and other devices would be unable to provide the unified border-monitoring system once envisioned.

“This kind of technology can be very alluring,” said Mark Borkowski, assistant commissioner at the U.S. Customs and Border Protection Office of Technology Innovation and Acquisition. “In the past, we’ve said: ‘That’s kind of cool. Let’s go out and buy it.’ That can turn out to be a less than bright thing to do.”

The U.S. military is offering the surveillance drones to border officials free of charge, said Mr. Borkowski. If the tests are successful, the military could provide Homeland Security with dozens of blimps and other surplus gear worth $27 million—a significant chunk of Mr. Borkowski’s annual equipment budget of $100 million to $130 million.

For years, specialized, helium-filled blimps have floated above Kabul and scores of U.S. military bases across Afghanistan and Iraq. Equipped with sophisticated cameras, infrared sensors and other detection equipment, the small blimps often float 2,000 feet over an area to keep a round-the-clock watch. They have been used to monitor militants planning attacks, insurgents planting roadside bombs and troops in battle.

The blimps, which can be a quarter of the size of the 192-foot-long Goodyear blimp, have become an increasingly valuable tool for soldiers, who are able to monitor the information from the nearby bases. 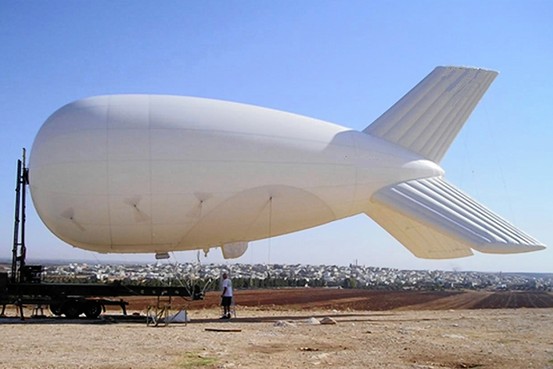 Equipped with radar and cameras for use by U.S. troops in Afghanistan and Iraq to monitor insurgents, the blimp (shown in Texas) will be tested along the U.S-Mexico border.
Photo: US Customs and Border Protection

Now that the American bases in Afghanistan are being shut down, the blimps—which can cost $1 million to $5 million each—will be part of the massive flow of equipment leaving that country over the next two years.

U.S. border officials already make use of other battlefield equipment, including unarmed Predator drones and another type of blimp that keeps watch for airplanes. The new blimps would be mobile platforms meant to keep watch on what is happening on the ground.

In south Texas, the military and border officials are trying out a 72-foot-long blimp made by TCOM LP of Columbia, Md. The blimp, which includes a battlefield sensor, is tethered to the ground by a cable that provides a communications link. Later this month, the test will expand to include another blimp equipped with different sensors.

This spring, border officials conducted a test in Arizona of a yet another blimp that was fitted with a battlefield camera known as Kestrel, a system created by Logos Technologies Inc. of Fairfax, Va., that is capable of continuously monitoring a city-sized area of land for days at a time.

But border officials still need to figure out if such equipment is the right fit for the agency and whether it is worth their while to dedicate increasingly scarce federal dollars to pay people to operate, monitor and repair the leftover military equipment.

“It’s one thing to take delivery of a system at a bargain price,” said John Appleby, a senior program manager at the Department of Homeland Security who oversees testing of such gear. “Well, does it fit in? It may have great capability for the military, but in our environment there are some fundamental differences.”