Posted on September 12, 2013 by LighterThanAirSociety 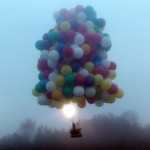 Jonathan Trappe was trying to become the first to cross the Atlantic using a cluster of helium-filled balloons, but had to land Thursday night in Newfoundland.

Jonathan Trappe, 39, of Raleigh, N.C., was attempting to become the first man to cross the Atlantic Ocean in a vessel powered by a cluster of multicolored helium-filled balloons. 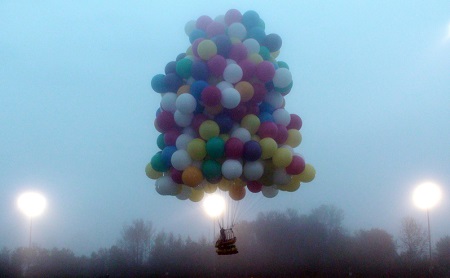 A balloon cluster carrying Jonathan Trappe lifts off from Caribou on Thursday. Unlike a conventional hot-air balloon, Trappe is relying on hundreds of helium-filled balloons clustered together.
Photo: The Associated Press / Mark McBreairty

Trappe left around sunrise Thursday from a field in the Aroostook County town of Caribou with his sights set on Europe.

A little more than 13 hours later, Trappe posted on his Facebook page the disappointing news.

“Landed safe, at an alternate location. Remote,” the post read. “Will stay here for the night.”

It was not immediately clear what caused Trappe’s balloon to land or whether he would attempt to resume his voyage.

A website that had been tracking the trip indicated the Trappe landed on the western shore of Newfoundland.

The journey – if successful – was expected to last less than a week, but Trappe had been preparing for two years.

Last November, he took a test flight in Leon, Mexico. The balloons lifted him as high as 20,000 feet before he descended and landed in a local lake. It was all the proof he needed that a trans-Atlantic trip was possible.

Trappe waited for the right weather conditions before leaving Maine early Thursday morning. The balloons were inflated and attached to an 8-foot “Portland Pudgy” dinghy made by Portland designer David Hulbert. If not for the balloons attached, the vessel looks like an ordinary rowboat.

His destination was always unknown. It could have been northern Europe. It could been Africa. It all depended on weather patterns.

Trappe did not have the ability to control the direction of his flight other than by climbing or descending. He could climb by throwing ballast, in the form of sand, overboard and descend by releasing individual balloons.

Trappe was well aware that the voyage – inspired in part by the Disney Pixar animated move “Up” – carries risk.

Since 1970, five people have died trying to fly balloons across the Atlantic, including passengers of two balloons that vanished.

“It’s the goddamn North Atlantic,” Trappe said in an interview with the Portland Press Herald in January. “I’ve given it some thought.”

The last person to pilot a balloon-powered vessel solo across the Atlantic Ocean was Joe Kittinger in 1984, although he used a hot-air balloon. Kittinger also embarked from Aroostook County.

Kittinger was in Caribou on Thursday serving as an on-site adviser to Trappe’s launch.

Trappe previously has flown across the English Channel, the Alps and Lake Michigan using cluster balloons but said none of those trips comes close to crossing the Atlantic.

“It takes a massive cluster to even get a person off the ground, let alone gear and ballast for a flight like this,” he said in January. “It will be 10 times what I’ve done before. It will be the largest cluster of balloons ever built, and it will be unlike anything that has ever gone before.”