Posted on October 30, 2014 by LighterThanAirSociety

An international team led by two veteran pilots has set its sights on breaking a pair of major ballooning records when it launches its helium-filled balloon from Japan in early 2015.

The duo is aiming for the shores of North America, an attempt that will put them on course to break a distance record of 5,208 miles (8,381 kilometers) that has stood for more than three decades.

They’re also looking to break the flight-duration record set in 1978 when Ben Abruzzo, Maxie Anderson and Larry Newman made the first trans-Atlantic balloon flight. That record of 137 hours in the air in a traditional gas balloon is considered the “holy grail” of ballooning achievements.

“A lot of records are meant to be broken. But it’s more out of a respect for the people, the pioneers, the Andersons and Abruzzos, that went before us to be able to go and replicate a flight they did and maybe just go a little bit further,” Bradley said.

“It’s really about appreciating the history of the flight, and gas ballooning is an absolutely beautiful way to fly,” he said.

The announcement by Bradley and Tiukhtyaev comes as hundreds of pilots and thousands of spectators gather in Albuquerque for the annual international balloon fiesta. Unlike the hot air balloons that launch from Balloon Fiesta Park every morning, the team’s “Two Eagles” balloon is designed to weather much higher altitudes and longer distances.

It will be outfitted with a high-tech navigation system, basic necessities such as a first-aid kit and equipment to communicate with the command centre, which will be located in Albuquerque.

The flight is expected to launch sometime in January or February.

Bradley said he and his co-pilot will be travelling to Europe to meet with one of the sport’s top meteorologists, Luc Trullemans, who also helped with adventurer Steve Fossett’s round-the-world balloon flight in 2002. They will be looking at weather patterns to determine a schedule that will allow them to spend the most time possible in the air. 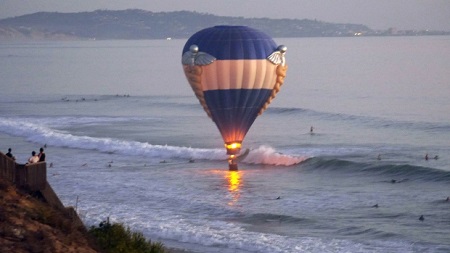 They will be flying at an altitude of at least 15,000 feet (4,572 meters). They will have oxygen masks and will be bundled up. The temperature inside their capsule will be about 50 degrees Fahrenheit.

The pilots have to be physically fit to endure several days inside the capsule, with little sleep and limited oxygen. And packing for the trip requires the pilots to be thorough.

“It’s like a camping trip in the sky,” Bradley said. “You need to bring all of the supplies you’re going to need because you can’t come back.”

Once the hatch is closed and they’re inside the cockpit, Bradley said it’s much like a video game, monitoring the GPS and other systems for updates on weather conditions, speed and altitude.

Albuquerque Mayor Richard Berry was on hand to introduce Bradley before the news conference.

“This is absolutely outstanding for us,” Berry said, giving a nod to the city’s ballooning history and its long list of record-setting pilots. “It continues our tradition of adventure. We couldn’t be more proud.”