Posted on February 14, 2013 by LighterThanAirSociety 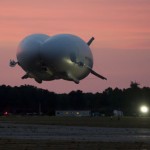 And so ends the U.S. military’s dream of mega-blimps strapped with powerful surveillance gear. The Army confirms to Danger Room that it’s killed the last of those lighter-than-air ships.

Say goodbye to the Long Endurance Multi-Intelligence Vehicle, or LEMV. Built by Northrop Grumman, it’s a dimpled blimp as long as a football field; seven stories high; and carries a price tag of over half a billion dollars. The plan was to use the blimp over Afghanistan, where its gondola could haul seven tons of cargo — including advanced camera gear able to see dozens of square miles of terrain with crystal-clear resolution at a single blink. It would stay 20,000 feet above the warzone for weeks at a time, something beyond the capabilities of any spy plane, manned or piloted. Trials over Afghanistan were slated for early this year.

Not anymore. A report in InsideDefense citing anonymous sources said LEMV quietly met the Army budget axe last week. The Army confirmed it, on the record, to Danger Room late on Thursday.

“Due to technical and performance challenges, and the limitations imposed by constrained resources, the Army has determined to discontinue the LEMV development effort,” Army spokesman Dov Schwartz emails.

That came as news to the branch of the Army actually testing the blimp. “The Department of the Army has not notified the Army Space and Missile Defense Command of any programmatic changes to the LEMV program,” spokesman John Cummings told Danger Room earlier Thursday. “LEMV continues to be a technology demonstration at SMDC.” Northrop Grumman was surprised by word of the cancellation; it has yet to comment. 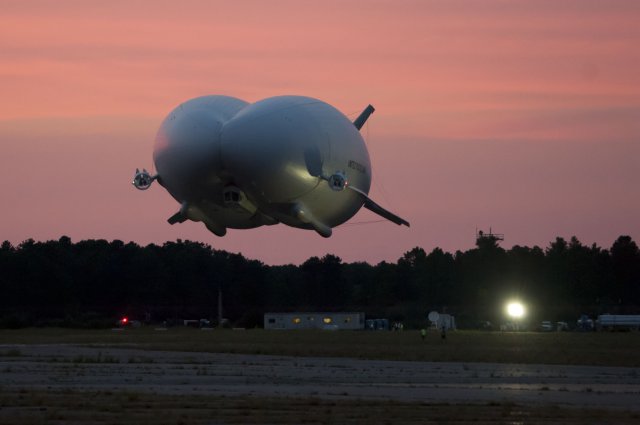 This photo from August 2012 shows the only flight of the Long Range Multi-Intelligence Vehicle, a ginormous spy blimp that the Army has now deflated.
Photo: U.S. Army

The LEMV has been in trouble for awhile. A technical analysis in 2011 questioned whether the blimp could actually stay aloft for the 21 days Northrop hyped, and figured it was closer to 10. Although the ship was supposed to head to Afghanistan this year, its only flight has been its maiden August test voyage over New Jersey, which was months late. The Army, once a vocal LEMV booster, began backing away from the blimp in October.

And as the LEMV goes, so too went the military’s dreams of giant spy blimps for the foreseeable future.

Last year, the Air Force abruptly canceled its contract for the Blue Devil, a blimp seven times larger than the Goodyear Blimp and LEMV’s main rival. It was a massive reversal: More than just a lighter-than-air vehicle for spy gear, it was to host 12 different sensors and a supercomputer that made Blue Devil capable of acting as a quarterback coordinating other aerial spy gear. Only the avionics arrived late to the party, and technical challenges mounted.

Not even the backing of the Air Force’s former intelligence chief, whose company built the thing, could spare Blue Devil: As my colleague David Axe reported, the Air Force office running the Blue Devil added requirements in a bureaucratic shanking. The Air Force likes planes, not blimps. With Blue Devil dead, all that remains of the mega-blimps is the LEMV.

Here’s the justification for the mega-blimps. They give the U.S. military a middleweight spy tool, between the heavyweight spy satellites orbiting Earth and the welterweight spy planes taking pictures thousands of feet over a given swath of territory. Each has their functions: Satellites pick up huge, wide views and spy planes, manned and unmanned, provide hours’ worth of imagery. For something in between — say, weeks’ worth of so-called “pattern of life” data, send in something lighter than air, higher and more persistent than a plane, below a satellite, and carrying a ginormous amount of sensors, cameras and data processors.

Lots of people in Congress never bought it. As the budget for spy blimps ticked upward and the Army and Air Force fought over who controlled the mega-airships, the Senate Armed Services Committee in 2011 questioned why two competing airframes were necessary. By the time the two top Senate appropriators — the most important legislators in the chamber — threw their weight behind the Blue Devil, the Air Force had all but decided blimps were a non-starter.

The LEMV cancellation means an entire model of aerial surveillance is stillborn. The future of military blimps will be miniaturized: U.S. bases in Afghanistan often use tethered aerostats strapped with cameras above their fortifications to enhance their ability to spot insurgent threats beyond what the eye can see. But with the U.S. packing up from Afghanistan, the smaller blimps have also lost their rationale. The sound you hear is a lot of military hot air escaping.