Another Chance for Commercial Airships?

Posted on March 30, 2011 by LighterThanAirSociety 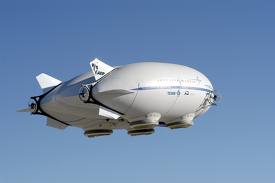 Lockheed Martin’s famed Skunk Works has signed a contract with a private Canadian company to develop, certify and produce a family of commercial cargo airships derived from its P-791 hybrid aircraft demonstrator, which flew back in 2006.

The Calgary-based company, Aviation Capital Enterprises, plans to sell the aircraft to operators in the oil and gas sector and other markets where heavy loads need to the lifted to remote or inaccessible regions – like the tundra of northern Canada or the marshlands of Cameroon.

This is not the first time a commercial company has tried to get a cargo airship off the ground. Germany’s Cargolifter tried back in the 1990s with the 160-ton-payload CL-160, but went bankrupt. Canada’s SkyHook International contracted with Boeing in 2008 to design the 40-ton-payload JHL-40 airship/helicopter hydrid, but has stalled for lack of money. Australia’s SkyLifter is trying to develop a 150-ton-payload lens-shaped airship.

Lockheed’s design is a hybrid airship: it gets its lift from a combination of helium bouyancy, aerodynamic forces and vectored thrust, and takes off and lands like a conventional aircraft, but with an air-cushion landing system that allows it to operate from unimproved surfaces and even water.

Aviation Capital will pay Lockheed to develop and certify the SkyTug, and says the first experimental aircraft will fly in 2012, with plans to award Lockheed a contract to begin production of the initial 20-ton-payload version in 2013. A 50- to-70-ton payload version would follow and bigger aircraft are planned.

A small private company, Aviation Capital says developing the first two variants will cost it more than $500 million, which it plans to raise from investors. With all the heavylift airship projects that have been started there is clearly a market demand, but most have sprung a leak when it comes to finding the money. Fingers crossed this time.