90th anniversary of the loss of USS Shenandoah commemorated in Ava

Posted on September 7, 2015 by LighterThanAirSociety 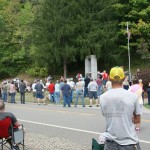 The loss of the U.S. Navy rigid airship USS Shenandoah and 14 of her crew over southern Ohio on Sept, 3, 1925 was remembered in a ceremony on Sept. 6, 2015, near where the dirigible broke up in the air during a violent thunderstorm.

More than 100 people gathered in front of the memorial in Ava, Ohio, for the once-every-five-years event. This was the first modern commemoration since 1995 without Bryan Rayner, one of the organizers of these events, who passed in 2013. His widow, Theresa, and her two daughters, Tiffany and Emily, carried on the tradition this year, with help from family and friends. 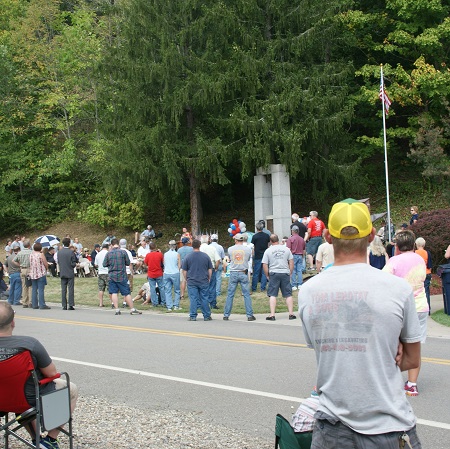 More than 100 people gathered in front of the memorial in Ava, Ohio, for the once-every-five-years commemoration of the loss of the U.S. Navy rigid airship USS Shenandoah.

Aaron Keirns, author of “America’s Forgotten Airship Disaster: the Crash of the USS Shenandoah,” served as emcee. The Shenandoah “Zeps” High School Band provided the music, and the Noble County Color Guard performed the gun salute. New this year, the Noble County Amateur Radio Club transmitted messages throughout the afternoon – appropriate, because radio messages from the airship confirmed the disaster unfolding in the air in 1925. The local commercial radio network also was on hand to broadcast attendee comments during the day. The Rayner’s Shenandoah Mobile Museum, parked opposite the memorial, was staffed by members of The L-T-A Society. The invocation and benediction were offered by pastors Jimmy Rogers and Ken Harper, respectively, representing Ava’s two Methodist churches. 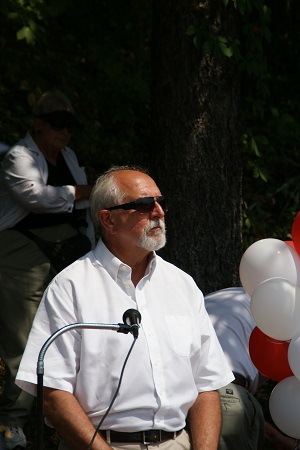 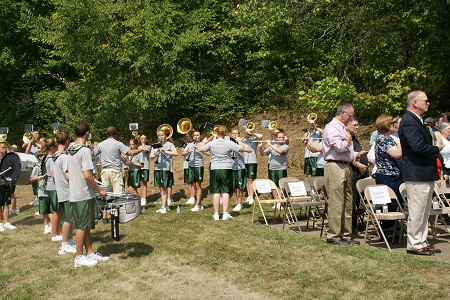 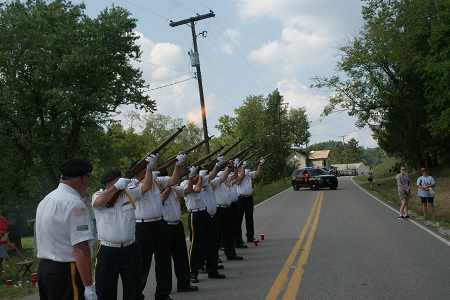 Giving the keynote speech, Judi Tarowsky recounted stories of the “Heroes of the Shenandoah,” similar to the presentation she made in Akron on Aug. 1. Gathered primarily from eye-witness accounts in period newspaper reports, the well-researched talk captured the attention of those present with personal details of the crew’s fateful journey on Labor Day weekend 90 years earlier. She described the heroes as “people going about their everyday lives, called upon to do something extraordinary, who answer that call.” 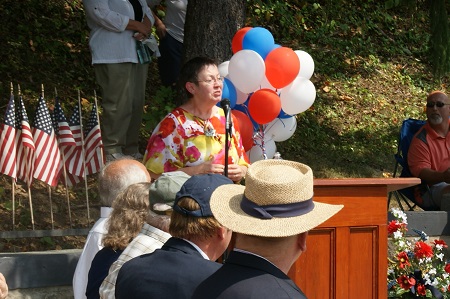 Judi Tarowsky recounted stories of the “Heroes of the Shenandoah”.
Photo: Alvaro Bellon

Woven into her narrative were stories of people who witnessed the crash and were among the first to offer aid to the survivors. Tarowsky’s emotion-stirring account concluded with her acknowledging those who remember and honor the loss of the naval airship and her crew as modern-day heroes of the Shenandoah, noting in particular the efforts of the Rayner family. 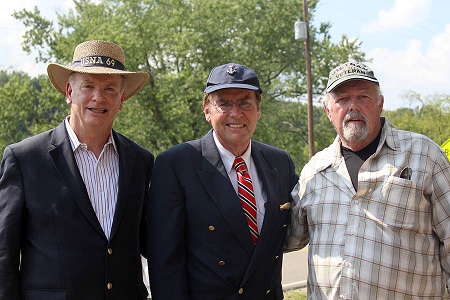 Filling in for Naval Airship Association President Fred Morin, board member David R. Smith continued the theme of the airship’s heroes existing today, thanking area residents for their efforts in preserving U.S. Navy history. He remarked, “There’s no place in this country like Noble County, Ohio, and what you do on a daily basis commemorating the airship Shenandoah and the sacrifice of her crewmen reaches around the world. People know of this place.” 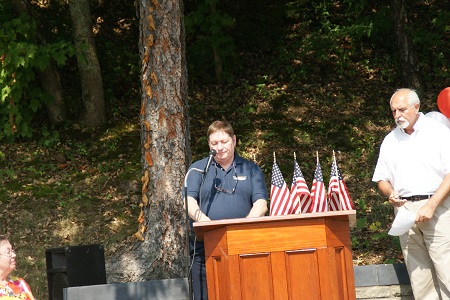 Smith spoke about the efforts of the present generation, whose parents and grandparents honored the crewmen, who carry on the tradition. Among those he mentioned were the Rayners, Paul and Sybil Phelps, who own the land where the airship’s center section fell (Site 2), and Mark and Missy Ginn, who made a new flagpole for Wreck Site 2. Smith also thanked the unknown person who freshened the paint on Wreck Site 3’s sign in Sharon, Ohio, who later was identified as Jane Barnett.

Speaking for The L-T-A Society, Board Chairman David Wertz thanked members of the community “who have so carefully and lovingly preserved these crash sites.” He remarked that the fact that they still exist to be visited is proof of the community’s love and respect for the history that happened here. 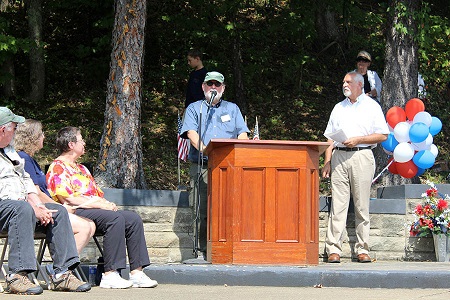 Solemnizing the event, C. Lansdowne Hunt and Wick Elderkin Houghton placed a wreath at the granite memorial in Ava. Two members of the band, Jonah Clark and Serena Durben, played “Taps” as the great-grandchildren of Zachary Lansdowne released clusters of helium-filled balloons. Fourteen white balloons honored the 14 crewmen killed in the crash; 29 red and blue balloons honored the airship’s 29 survivors. 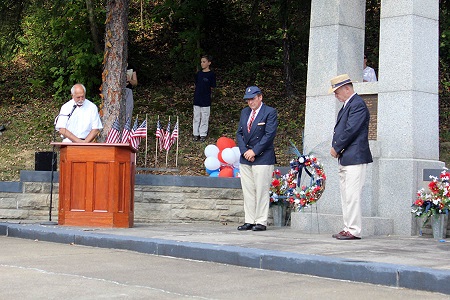 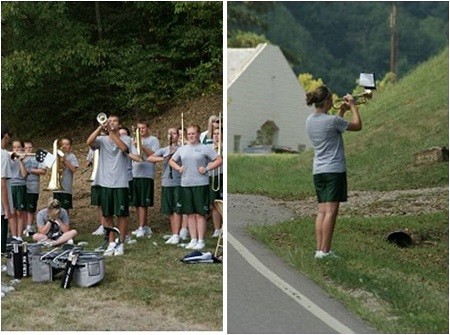 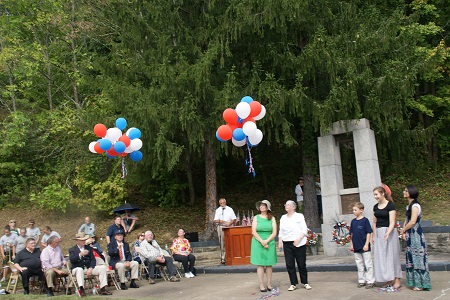 The Rayner family had installed a new flagpole at the Ava memorial site, and during the event, revealed a plaque stating, “This flagpole is dedicated to all those who endeavor to preserve and promote the history of the Shenandoah, her crew, and lighter-than-air flight. 6 September 2015.” 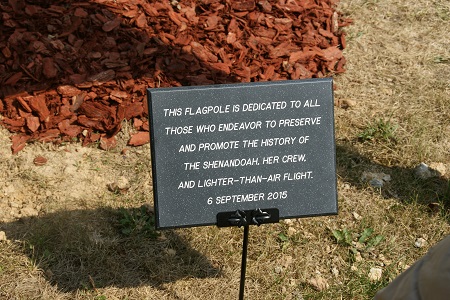 During the event the Rayner family unveiled a plaque at the base of a new flagpole they installed.
Photo: Alvaro Bellon

In cooperation with the Phelps family and the Noble County Historical Society, The L-T-A Society and the Naval Airship Association are updating the signs at Shenandoah Wreck Sites 2 and 3. The new 8 ft. x 12 ft. sign at Site 2 (near I-77 mile marker 31.5) replaces a deteriorated four-foot. by eight foot sign placed at the tree line in 1991. The new sign’s prominent graphics, provided through David Smith’s printing business, are made more visible to motorists by a location closer to the highway. Members of The L-T-A Society, led by Vice Chairman John Cunningham, helped to install the sign in August. A new, 32 ft.-high flagpole provided by the Phelps and Ginn families now flies the flags of the United States and U.S. Navy above the sign. 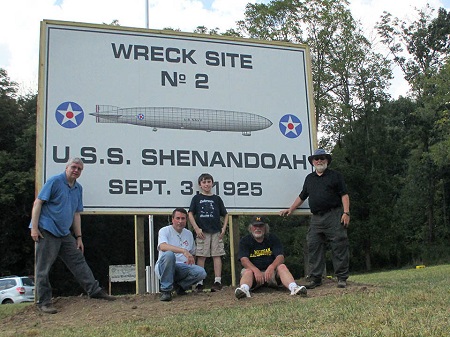 A 4 ft. x 8 ft. sign, carrying similar graphics and also supplied by the LTAS and NAA, is planned for Site 3.

A 95th anniversary program in memory of the USS Shenandoah is planned for 2020.