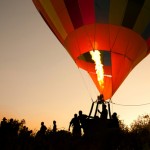 WELLINGTON, New Zealand — A hot air balloon hit a power line, caught fire and crashed, killing all 11 people on board and devastating the town where it happened.

The sightseeing balloon, carrying a pilot and five couples, came down on a farm outside Carterton, a town with a tradition of ballooning among locals and visitors.

“We saw two people jump out and everyone was screaming — the screaming was just terrible — and then when the canopy went up in flames it just dropped,” Aurea Hickland was quoted by the New Zealand Herald as saying. 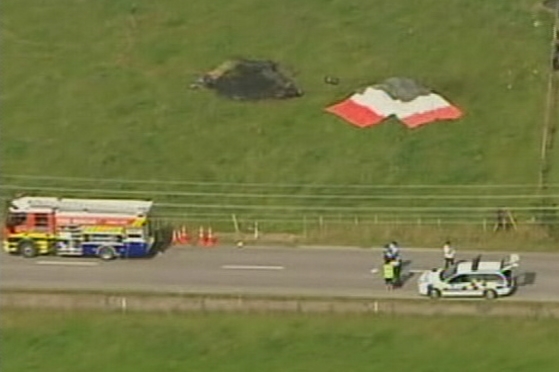 Part of the crash scene is seen from the air in Carterton, New Zealand. NBC News

A family member who was waiting nearby for the balloon to land cried that the family had purchased the scenic ride for their parents as a Christmas gift, Hickland said.

Rusbatch said it appeared the balloon’s basket struck power lines that set a fire on board.

Eyewitnesses told local media of flames shooting up to 30 feet from the balloon’s basket before it plummeted to the ground.

Bevan Lambeth said the basket was on fire “and the power lines were holding the basket down, but it was still about 50 meters (165 feet) in the air. Then the whole basket started to go up in flames,” as the balloon broke clear of the electric lines.

“I saw … (it) then go straight up in the air and the flames just engulfed the whole balloon and it crashed to the ground. When it came down it came down really quickly … after it was released from the lines,” he told TVOne News.

“The people were enjoying a nice ride and by the looks of it they clipped a power wire,” the Fairfax NZ News quoted an unnamed resident as saying.

“I was watering the garden and heard a noise, the noise of the gas to raise the balloon,” added resident David McKinlay. “I looked over and I couldn’t believe it — one side of the basket was on fire.”

“It was just above the trees when I first saw it … it looked like he (the pilot) tried to raise it a bit higher … all of a sudden there was just 10 meters of flames,” he added.

“It came down like a bloody rocket and then there was a big bang,” McKinlay was quoted as saying in The Herald. “It was just flames and it was just a long streak of flames … The impact must have been terrible.” 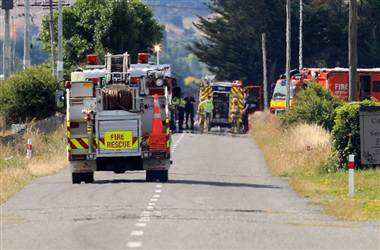 The identities of the victims were not immediately available. Some of the couples reportedly were from the area.

Carterton is some 50 miles north of Wellington, New Zealand’s capital.

New Zealand’s Transport Accident Investigation Commission opened an immediate inquiry. Investigating officer Peter Williams said investigators had looked at the crash site but had yet to begin witness interviews. The investigation could take up to a year, he said.

The crash was the deadliest air disaster in New Zealand since 1963, when a DC-3 airliner crashed in the Kaimai Range, killing all 23 passengers and crew aboard, according to the History Group of the New Zealand Ministry for Culture and Heritage.

(The Associated Press contributed to this report.)