Posted on February 17, 2014 by LighterThanAirSociety 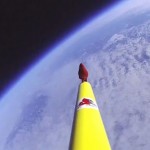 He thought a project of NASA proportions that could be done for cheap would be an educational and rewarding project for the students.

Eventually funding was awarded to Gagnon and his team of physics students he dubs the Chi-Hi High Altitude Balloon Club.

Friday morning, their semi-monthly meetings came to a climax as they launched the near 7-foot diameter weather balloon from the Chi-Hi parking lot just 20 minutes after sunrise.

“The main thing is to get above the clouds,” Gagnon said Friday morning, adding that the group hoped to capture images of outlining the curvature of Earth. 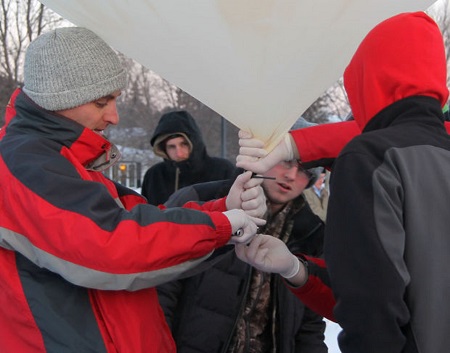 Chi-Hi physics teacher, Nick Gagnon, left, and members of the club prepare the weather balloon for launch Friday morning in the parking lot of Chi-Hi.

The high-altitude balloon, which cost about $100, was attached to a parachute and four other primary components, including a high-definition camera that recorded to an SD card, two GPS units and a microcontroller.

One of the GPS units was a SPOT locating transmitter that uses a chip to send a location to communication satellites. Those messages are sent every 10 minutes to satellite antennas that send the message to a specific network.

“Without Gale, we probably couldn’t have done this,” Gagnon said.

Sorum designed the GPS connected to the ham radio that sends out a signal every 90 seconds on 144.390 MHz. Different ham radio stations in Wisconsin pick up the signals and broadcast that information on the internet.

About 15 minutes after launch, the students lost the signal, but AP physics student Jacob Letendre explained that likely either the payload was out of range of a station or in range of stations that don’t broadcast online. 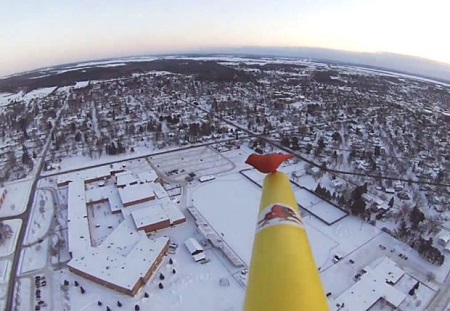 A bird’s-eye view of Chippewa Falls High School is taken seconds after launch from the faculty parking lot Friday morning, just after sunrise.

The other major component of the payload was a microcontroller that recorded the temperature and humidity outside; and the inside air pressure and light intensity and other GPS data. Gagnon said the plan for future projects is to let the students design the microcontroller.

The latitude and longitude was then plotted on maps that students could follow on websites like Google Maps.

Gagnon said as the balloon hits the troposphere, it encounters temperatures near 70-below zero. As it enters the stratosphere, the air begins to warm to “probably warmer than it is here,” Gagnon said.

Under pressure, the balloon would constrict as it encounters cold temperatures. But because the pressure decreases as the balloon gains height, there’s less pressure outside the balloon than there is inside as the helium pushes outward. 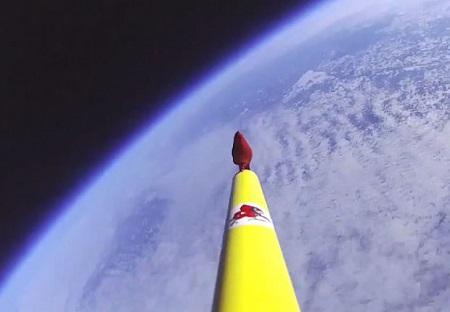 The cardinal sits perched on a PVC pipe attached to a weather balloon that floats at the outer edge of the atmosphere as it records the Earth from more than 100,000 feet up, just seconds before the balloon burst.

The balloon expands and eventually pops, and the parachute helps bring it down safely.

The students had off school Friday, meaning the HAB club could spend the majority of the day tracking the payload. After it dropped, nine students hopped into a van with Gagnon to pick it up.

Gagnon said a winter day made the job easier, since warmer days could have meant a greater chance for the payload to end up in water.

The club retrieved the payload in the town of Arpin, near Marshfield, in a farmer’s field. Gagnon said from launch, the payload traveled for 87 minutes to 100,000 feet before the balloon popped. It was under the parachute for about another half-hour.

“The only thing we got out of it that was useable was the video, and we got the landing information which was really the most important,” he said.

Gagnon said it’s not clear what caused the malfunction, but the team was able to retrieve all of the equipment.

“It’s going to be a great learning experience for the kids,” he said. “We have a lot of troubleshooting to do, but the main thing is ultimately it was successful.