Balloon to rise over Fort Sumner

Posted on August 31, 2014 by LighterThanAirSociety 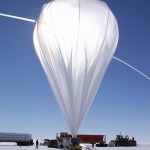 If the stratospheric winds are favorable, a giant balloon will soon rise over the desert, carrying aloft X-Calibur, a cutting-edge telescope.

Many a child has forgotten to hold tight to the string of a helium balloon only to have it escape and rise until it disappeared in the glare of the sun. Helium balloons want to rise, but launching a balloon big enough to hold a 747 jetliner with room to spare at the nose and tail and both wingtips isn’t as easy as just letting it go.

In a few days, a balloon-borne telescope sensitive to the polarization of high-energy “hard” X rays will ascend to the edge of the atmosphere above Fort Sumner, N.M., to stare fixedly at black holes and other exotic astronomical objects. It will be carried aloft by one of those 747-jetliner-sized balloons. 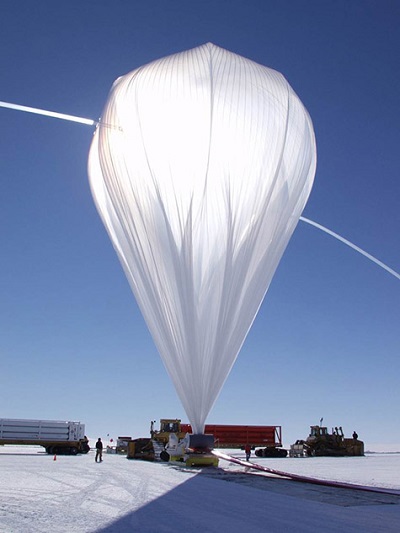 High-pressure helium from Kelly trucks carrying gas cylinders rushes through fill tubes extending from the top of a balloon that is pinned to the ground by a spool truck. The rest of the balloon’s flight train is laid out on the ground to the right. The photos in this article were taken during several different balloon campaigns, this one in Antarctica.
Photo: NASA

When X-Calibur, as the polarimeter is called, looks to the skies, it will see things that have never been seen before because it is looking at characteristics of high-energy light that astronomers are just beginning to explore. Last year Henric Krawczynski, PhD, professor of physics in Arts & Sciences at Washington University in St. Louis and X-Calibur’s principal investigator, described X-Calibur’s mission in an episode of the university’s “Hold that Thought” podcast called “Beautifully Bright Black Holes.”

While the scientific team works to make sure the instrument is flight ready, we asked Scott Barthelmy, PhD, a Washington University graduate who works for NASA’s Goddard Space Flight Center and is the veteran of many stratospheric balloon campaigns, to describe how the giant balloon is launched. What follows is an edited transcript of his description. 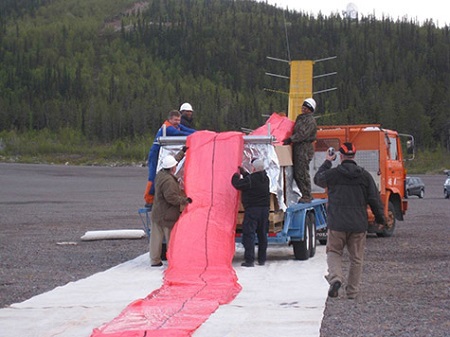 The fan-folded balloon is delivered to the launch site in an enormous crate. Here the crew is carefully pulling it from the crate and laying it onto a protective tarp prior to launch.
Photo: NASA

SCOTT BARTHELMY: Before launch the entire flight train, consisting of the fan-folded balloon, a “flight ladder” of steel cables, and a parachute and its shroud lines, is laid out on heavy-duty tarps between two specialized launch vehicles, the spool truck and the launch truck.

The balloon, made of plastic as thin as a dry-cleaning bag, rises to a float height of about 120,000 feet, which is three or four times higher than the cruising altitude of commercial airliners. At that height it is above all but half of 1 percent of Earth’s atmosphere.

Once the balloon is laid out, the top end is threaded under the spool on the spool vehicle. The spool is hinged on one side, has a quick release latch on the other, and is coated with Teflon to minimize friction. Valves are then opened on helium-truck hoses and high-pressure helium screams through fill tubes into the tip of the balloon. As the balloon fills, the spool truck moves along the balloon to keep the un-inflated portion stretched out across the ground. 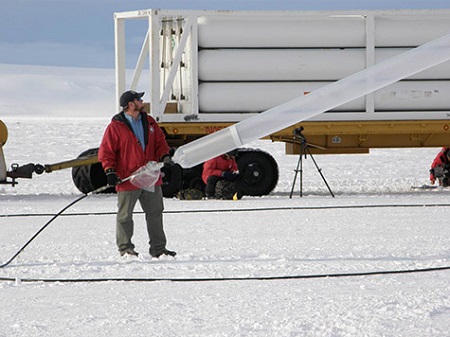 Close-up of a helium-carrying Kelly truck and a fill tube.
Photo: NASA

Only the tip of the balloon, called the bubble, is filled because the helium expands by a factor of 200 as it rises mushrooming into a 40-million-cubic-foot sphere, slightly distorted by the weight at the bottom, at float height. 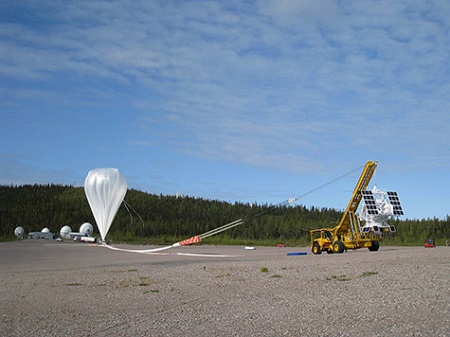 Before launch, the length of the flight train lies on the ground between the spool vehicle (left) and the launch vehicle (right). The checkered part of the train is the re-entry parachute.
Photo: NASA

Once the bubble is filled, the launch team waits for a lull in the surface winds and then releases the catchment mechanism on the spool. Strong springs flip the spool out of the way. Now there’s nothing holding the 10,000 pounds of free lift provided by the helium bubble. As the bubble rises, it picks up more and more of the balloon — there’s still about 900 feet laid out on the tarp at this point — and begins to arc over the launch vehicle, a motorized crane that is holding the scientific payload about 10 feet off the ground. 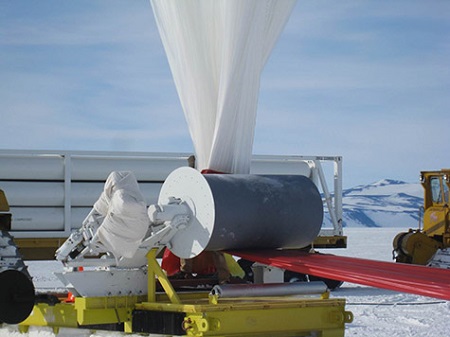 A close-up of the spool with the bubble rising above it.
Photo: NASA

Even though balloons are launched only during the lull at dawn or at dusk, a balloon is a creature of the wind and easily pushed about. It is the launch vehicle’s job to compensate for crosswinds during the delicate few moments before release by maneuvering the payload beneath the rising and drifting balloon. 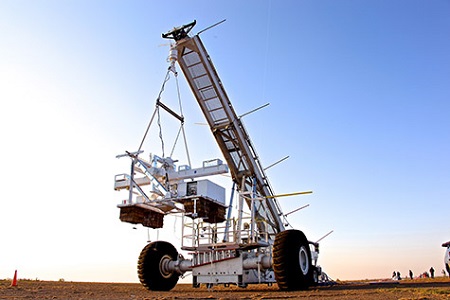 A launch vehicle carrying a payload to the launch area. The payload in this test deployment is the Wallops Arc Second Pointer (WASP), an instrument that can point balloon-borne telescopes at targets with sub arc-second accuracy. Notice the crush pads under the instrument and the people to the far right.
Photo: NASA

When the balloon is directly above the launch vehicle and at full stretch, a release pin on the end of the crane boom is pulled by a man standing on the front of the crane.

If the pin is pulled at just the right moment, the balloon will be lofting the full weight of the payload. If it is pulled too early and the balloon hasn’t picked up that weight, the payload will fall to the ground and smash. The balloon must be pulling upward but it can’t be pulling too hard, or the release pin may jam. And it must be a few degrees past vertical, not directly overhead. If it’s directly overhead it might drag the payload through the crane instead of out and away from the crane.

Everything will be lined up and moving in the right direction for only five or 10 seconds. The man on the crane judges the moment, pulling on a lanyard to pop the pin, freeing the balloon to rise — at last — into the atmosphere.

The complex choreography of the launch is managed by employees of NASA’s Columbia Scientific Balloon Facility in Palestine, Texas, under a contract administered by the Goddard Space Flight Center’s Wallops Flight Facility in Wallops Island, Va. In over 40 years of operation, CSBF personnel have launched more than 2,000 balloons.

Armchair observers can watch near-real-time video of the X-Calibur launch on the  Columbia Scientific Balloon Facility website. While the balloon is aloft, it will be tracked on a Google Earth map. Click early and often. The balloon might fly as soon as Labor Day.