And the 2016 World Hot Air Balloon Champion is…

Posted on December 1, 2016 by LighterThanAirSociety 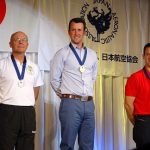 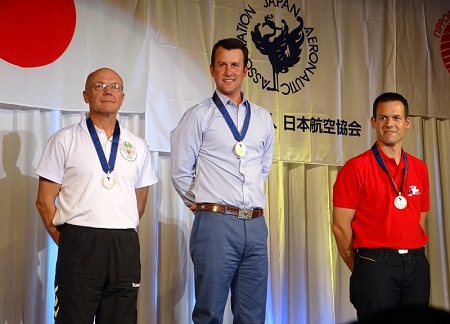 The Top 10 competitors are:

With 5 000 points available, and 14 competitors within striking reach, Heartsill could not simply sit on his lead. In Task 27, his 2.43 meter performance earned him 802 points, somewhat below his 852 points per task average in previous tasks. In Task 28, 1.22 m earned 801 points, again, below his average and allowing others to close the gap. Task 29 required competitors to achieve a result less than 100 meter to achieve a result. Heartsill avoided potential disaster with a 94.40 meter performance but only earned 660 points. While he maintained 1st place through the first three tasks, the opportunity was there for others to gain points and positions. In Task 30, Heartsill rebounded with a 2.45 meter performance for an above average 980 points. In Task 31, he completed the last task of the competition with a 2.26 meter performance for 926 points. In summary, he gave up a few points in the first three tasks of Flight 9 but closed with two above points per task average performances in the last two tasks.

The graphic below shows Heartsill maintaining first place for 20 tasks. It also shows how other competitors moved into, out of and within the Top 10. Only a few competitors in the Top 10 after early tasks managed to stay in the Top 10 when competition ended. 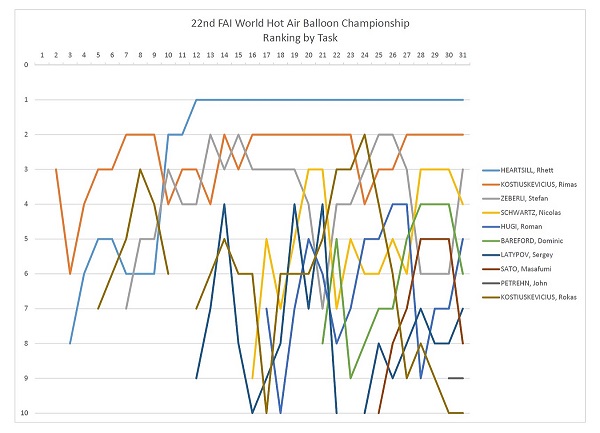 The 22nd FAI World Hot Air Balloon Championship was superbly organized by the Saga International Balloon Fiesta Organization led by Hiroshi Mizumachi and the Competition Operations Team led by Event Director Les Purfield and Deputy Event Director Hiromori Soejima, to the extremely high level of professionalism and detail that we have come to expect at events in Japan.

This is the fourth time the World Hot Air Balloon Championship has been held in Japan and the third time in Saga. Previous events in Saga were in 1989 and 1997 and at Motegi in 2006.

Detailed information about the 22nd FAI World Hot Air Balloon Championship, including results as the competition progresses, can be found here.

The 23rd FAI Hot Air Balloon Championship will be held in Austria from August 18 through 26, 2018.