Posted on October 27, 2014 by LighterThanAirSociety

Say you’ve got to skip town in a hurry. Maybe you owe somebody a lot of money; maybe the mayor’s daughter is in love with you and you’re below her station; or maybe it’s 1870, the Franco-Prussian War is on, and you have to ditch Paris because it’s under fierce siege and you’re the minister of the interior. In any case, here’s what history advises:

Flee in a hot-air balloon.

Okay, Paris ultimately lost the war, so “worked like a charm” may be overstating things, but still—Gambetta lived, didn’t he? He did. He became a prominent statesman.

At the time of his spectacular escape, Paris had been shelled by the Germans and Napoleon’s empire had fallen; Gambetta helped to improvise a new government and advised running it from someplace other than the capital, given the city’s precarious condition. A delegation left for Tours to organize the resistance, but Gambetta himself had to be sure to elude capture by the Prussians.

The safest way, against all odds, was by balloon: couriers had been delivering the mail to Paris that way with great success. And so they smuggled him out on the sumptuously named (if not sumptuously appointed) Armand-Barbès, one of some sixty-six balloons. He made it to Tours intact and resumed his post with vigor.

After this comes the part where the French lose anyway, but let’s skip that and wonder instead how Gambetta felt up there, in transit. I mean, I’m sure he was terrified, at least partially—his capture would be the end of him—and yes, there must’ve been a good bit of patriotism coursing through the old veins, but I hope he took a deep breath and saw the bigger picture, saw himself wafting into the history books on a hot-air balloon, Prussians cursing the sky and stomping on their hats.

And how, once he’d reached safety, could he find it in himself to talk about anything else?

Hello, I would say by way of introduction for the rest of my life, It is I, the man who fled Paris by balloon. No, no, remain seated. Hold your applause. 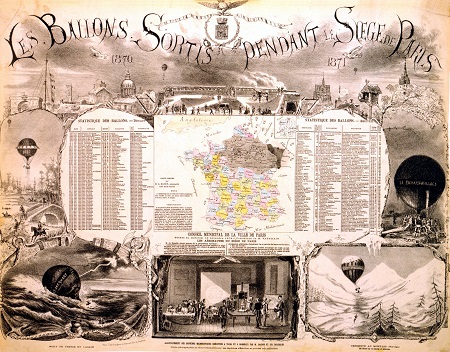 A broadside about ballooning during the Siege of Paris, 1870–1871, with a list of balloons that left the city.