Posted on December 8, 2013 by LighterThanAirSociety 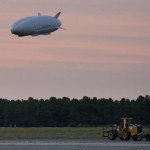 Robin Young of Amur Minerals Corp. wants to dig for nickel and copper in Siberia where forbidding winters and poor roads make it tough to haul in equipment. His best option: fly it in with zeppelins.

Otherwise the London-traded explorer would have to spend about $150 million building a 350-kilometer (218-mile) road to truck in heavy construction gear, Chief Executive Officer Young said in an interview. Peter Hambro, executive chairman of gold producer Petropavlovsk Plc, said he invested in a maker of the airships and foresees the mining industry adopting them.

Zeppelin and blimp manufacturers need mining contracts to creep back to life; 76 years after the Hindenburg burned and crashed in New Jersey, ending most buyer interest for decades. With better designs and a buoyant gas that can’t ignite, makers such as Worldwide Aeros Corp. and Hybrid Air Vehicles of the U.K. say they’re negotiating their first sales to the $960 billion mining industry to complement truck and rail transport.

So far, rejections have been plenty. OAO GMK Norilsk Nickel looked at zeppelins to transport equipment to build a mine in Siberia a decade ago and decided instead to use conventional airplanes. It later built a fleet of icebreaker vessels to ship its nickel out through the Yenisei River in Russia’s far north.

Polyus Gold International Ltd., the largest Russian gold producer, has considered using the zeppelins as an option to deliver heavy equipment to its Natalka project in the country’s far east, spokesman Sergey Lavrinenko said. “It was rejected, though, as at the time we couldn’t find a suitable offer on the market.” 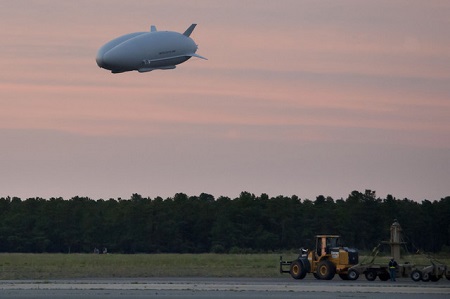 About 10 years ago Hybrid Air of Cranfield, England, built its first blimp, which unlike a zeppelin, doesn’t have an internal frame. It was to be used for advertising and documentary filming. The company sold its second airship, with a 5-ton cargo capacity, to the U.S. Army for surveillance in Afghanistan though the Army is returning it in December because of budget constraints.

Petropavlovsk’s Hambro said he would consider ordering one in the future for his business in Russia’s far east. Hybrid Air has developed and tested its non-rigid craft capable of performing in storm winds and conditions typical of Siberia and the Canadian tundra, spokesman Chris Daniels said. Those are the most likely regions where a lighter-than-air vehicle might get used.

To be sure, both Hybrid Air and Worldwide Aeros need to pass flight tests to get authority to fly their airships. Hybrid Air expects to get its certification within two to three years, Daniels said.

Hybrid Air is in talks with two companies that supply transport services to mining companies in Canada and expects to sign orders in the next couple of months for delivery as early as 2016, Daniels said. The airship will contain a rigid structure underneath the inflated canopy to carry 48 passengers and the cargo, he said.

For investors, the option of an explorer like Amur using an airship rather than raising funds to pay for a road before starting production is attractive, said John Meyer, an analyst at SP Angel Corporate Finance LLP in London.

“Amur’s project has a huge value, but the upfront funding and the fact it’s in Russia means that it’s difficult to finance,” Meyer said. “The ability to use an airship will completely transform the value of the company. They can start producing before spending all that extra money.” Amur, based in the British Virgin Islands, is named after the region of Siberia where it explores for nickel and copper.

There are only about a dozen blimps and zeppelins flying worldwide, most of them are used to float in the air for several days for advertising or carry tourists in Germany, according to Daniels.

Technological developments have helped manufacturers to build airships with larger lifting capacity and the ability to land and take off more often, he said. HAV is constructing a 400-foot blimp with a capacity to carry 50-ton cargoes.

HAV tested its 5-ton capacity airship in 70 mile-per-hour winds and most of the company’s potential customers are in Canada, Daniels said in an interview. The fuel costs are about 10 percent of a helicopter’s, he said. All lighter-than-air vehicles built after the Hindenburg disaster in 1937, when the airship’s hydrogen tanks caught fire killing 36 people, use non-flammable helium, he said. 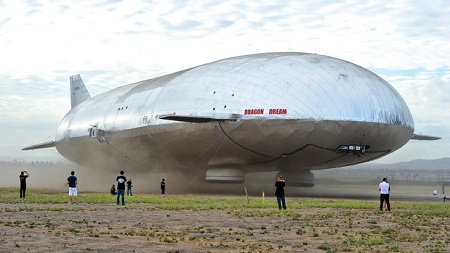 Worldwide Aeros is building airships about 500 feet long, with a zeppelin-like rigid structure designed to carry loads as heavy as 250 tons at speeds of more than 100 miles an hour, according to CEO Igor Pasternak.

The aircraft can ferry mining equipment to roadless terrain because they are light and can take off and land vertically, said Pasternak, who moved his closely held company from his native Ukraine to Los Angeles in 1994. Fuel costs are about a third of a cargo plane, he said.

Worldwide Aeros is planning to build fleets of 24 zeppelins to serve shipping industries, including mining, Pasternak said. The company is negotiating with potential clients and receiving their commitments to use the service, he said. 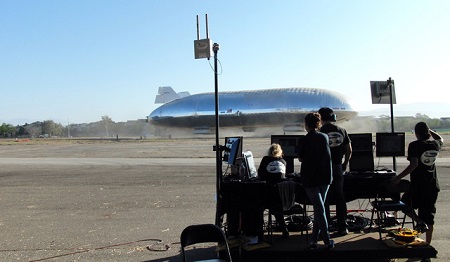 Worldwide Aeros is building airships about 500 feet long, with zeppelin-like rigid structure designed to carry loads as heavy as 250 tons at speeds of more than 100 miles an hour, according to Chief Executive Officer Igor Pasternak.
Photo: Worldwide Aeros Corp. via Bloomberg

Worldwide Aeros will operate the airships, which will be available for hire by customers, about a quarter of which are mining companies.

“Anything that allows us to move heavy weights over difficult terrain without spending a lot of money on the infrastructure is attractive,” Petropavlovsk’s Hambro said.

Hybrid Air plans to develop its 50-ton capacity blimp with a price tag of about $30 million to $40 million each and to follow this about two years later with 200-ton capacity airships, Daniels said. Worldwide Aeros, which is testing its 66-ton capacity airship, is seeking to raise about $3 billion to build the 24-strong fleet, with 20 of them having a capacity of 250 tons, CEO Pasternak said.

A shortage of helium has led to rising prices that could pose difficulties for the blimp producers. Helium prices for non-governmental use have increased by as much as 89 percent to $6.13 per cubic meter in the past five years, according to U.S. Geological Survey data.

The U.S., which in the 1920s sought to protect its helium supplies to keep a steady use for military dirigibles, in the 1960s began storing the gas in an underground reservoir in Texas after the blimp business didn’t take off as expected. The U.S. has the world’s largest reserves of helium, followed by Qatar, Algeria and Russia, according to the Geological Survey.

Today high-tech companies and manufacturers including General Electric Co., Siemens AG and Intel Corp., are among the main helium consumers. GE uses helium to cool magnets on its magnetic resonance imaging, or MRI, machines that provide internal images of the human body while Intel uses it to make computer processors.