The Little Dirigible That Could – And Did

Posted on September 5, 2014 by LighterThanAirSociety 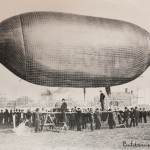 The Wright brothers’ first flight at Kitty Hawk in December 1903 was a private affair. But America’s first public powered flight wasn’t made by an airplane.

In 1904, an unlikely pair of carnival showmen managed a flight that changed not only their lives, but altered aeronautical history.

Listen to podcast of the program here.

One hundred and ten years ago, a San Francisco tightrope walker and parachute jumper named Captain Tom Baldwin created a dirigible called the California Arrow. The name had far more to do with showmanship than the actual craft. Unlike an airship like zeppelin, which would have a rigid framework, gas bag dirigibles were given their structure by the gas itself. The 40-foot, hydrogen-filled silk bag looked more like a giant floating potato. In September 1904, Baldwin unveiled his ship to the public at the Louisiana Purchase Exposition, better known as the St. Louis World’s Fair. There was only one problem for him as the pilot—he was too heavy to get it off the ground. 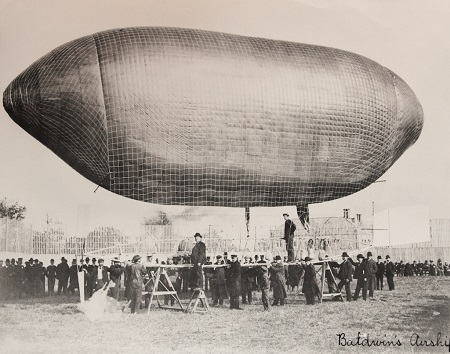 Fortunately, there was a young—and skinny—Ohioan at the fair looking for just such a break. His name was Roy Knabenshue, an itinerant balloonist from Toledo who called himself Professor Don Carlos. He was manning a tethered balloon ride concession. One day when business was slow, Roy allowed the balloon to go up while he held the tether with one hand, waving at the crowd hundreds of feet below. He was just the man to fly Baldwin’s ship.

The two men assembled the Arrow’s rickety wooden fuselage on the fair’s aeronautical concourse on the campus of Washington University. At one end of the frame was a tiny motorcycle engine and propeller; at the other, a huge rudder. Knabenshue was to stand on the frame, and steer the rudder left and right with ropes, and to walk forward and backward to make the ship climb or dive.

On October 25th, he climbed aboard. It was just before the last day of a grand competition for a $100,000 prize to fly a 15-mile L-shaped course. None of the previous competitors—all dirigibles—had made it out of the field. 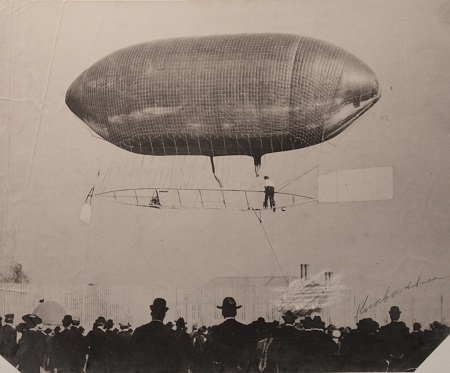 The Arrow in flight
Source: 91.3 WYSO

The engine was started, and Baldwin gave the signal. The Arrow started to rise. Knabenshue tugged the ropes, took a step or two back, and barely got over the airfield’s tall fence. He steered directly over the fairgrounds as thousands stared up in disbelief. The crowd erupted—a man was in flight. Then it was all over. The little engine coughed and died. Knabenshue drifted away, and eventually landed across the Mississippi River.

Nevertheless, Knabenshue and Baldwin were instant heroes. Headlines blared their success. They kept flying for the next several weeks, but never tried for the big prize. They left for California with a $500 award for demonstrating “dirigibility.”

For the next five years, Knabenshue, Baldwin, and the dirigible ruled the American skies. They split up and became competitors flying county fairs and major cities. Knabenshue took off out of Central Park and flew up Broadway. They trained pilots who would later become major stars. They were many Americans’ first introduction to flight.

But in January 1909, Knabenshue got dusted at the first Los Angeles air meet, when the crowd thrilled to the sight of Glenn Curtiss in his airplane. It was Curtiss who had built the little engine that powered Knabenshue’s flight in St. Louis. The one-man dirigible age was over. The future of flight had arrived.