Posted on November 3, 2014 by LighterThanAirSociety 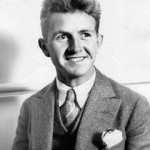 In 1928, 19-year-old Clarence Terhune became a sensation in Germany, after stowing away on the return leg of the maiden flight of the Graf Zeppelin, flying from Lakehurst, New Jersey to Friedrichshafen, Germany.

Terhune, a golf caddy from St. Louis, Missouri, who had already established a habit of stowing away on trains and ships and of crashing major sports events, made a bet with his brother-in-law that he could trump all previous stowaways with the Zeppelin. 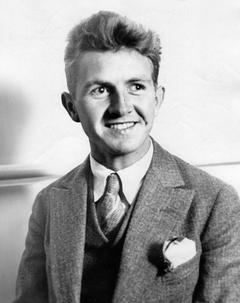 He snuck aboard while the dirigible was in its hangar and made his big reveal once over the Atlantic Ocean.

Though made to work in the kitchen for the remainder of the journey and arrested on landing, he was hailed as a hero by the German people, sent telegrams, invited to dinners and was even offered a job, it was reported. 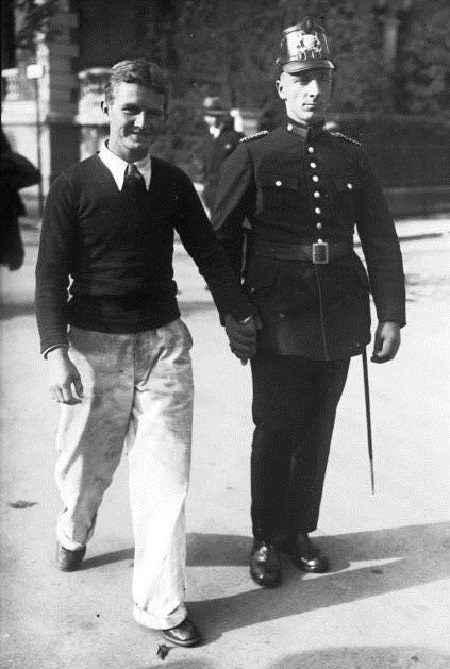 Clarence Terhune is arrested upon his arrival in Germany.
Photo courtesy of Bundesarchiv, Bild 102-06782

In October 1928 the Graf Zeppelin made its first intercontinental trip, a 9,926 km (6,168 mi), 111 hour crossing from Friedrichshafen to Lakehurst with Dr. Eckener in command. Capt. Ernst Lehmann, who would be killed in the crash of the Hindenburg at Lakehurst eight and a half years later, served as First Officer on the flight and U.S. Navy LCDR Charles E. Rosendahl, commander of the ZR-3 USS Los Angeles (ex-LZ 126), made the westward journey during which he also stood watch as a regular ship’s officer. Despite encountering heavy headwinds and stormy weather, Eckener had repeated the success of his first transatlantic crossing four years earlier when he delivered the LZ-126 to the U.S. Navy in October 1924 and was welcomed enthusiastically then both with a “ticker tape” parade in New York and a subsequent invitation to the White House. 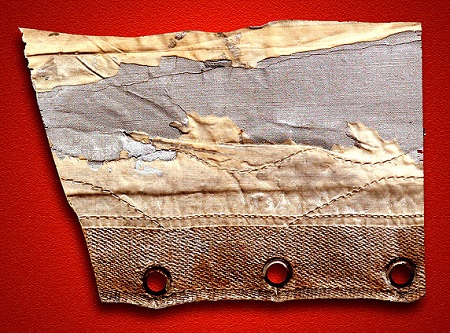 A portion of the damaged fabric covering removed from the Graf Zeppelin in October 1928, after its first transatlantic flight from Germany to NAS Lakehurst, New Jersey.
Source: The Cooper Collection of Zeppelin Postal History

On this first transatlantic trip the airship suffered potentially serious damage to its port tail fin on the third day of the flight when a large section of the linen covering was ripped loose while passing through a mid-ocean squall line at night about 1,500 miles (2,400 km) east of Bermuda (35N, 42W). With the engines stopped, the ship’s riggers did their best to tie down the torn fabric to the framework and sew blankets to the ship’s envelope while attempting not to fall to the raging seas just below. In the interest of safety, the riggers (including Dr. Eckener’s son, Knut) retreated back into the ship whenever it dropped to within a couple of hundred feet of the ocean’s surface. This allowed the engines to be restarted to maintain lift. 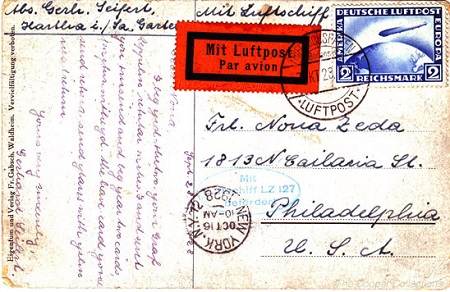 The Graf crossed the U.S. coast at Cape Charles, Virginia, around 10 am on October 15, passed over Washington, D.C., at 12:20 pm, Baltimore at 1 pm, Philadelphia at 2:40 pm, New York City at 4 pm, and landed at the Lakehurst Naval Air Station at 5:38 pm. After an almost two-week stay in the United States, during which time its damaged tail was repaired, the Graf left Lakehurst for Germany at 1:24 am on October 29 and arrived back in Friedrichshafen shortly before dawn on November 1.

See a preview of Zeppelin Stowaway