Posted on December 20, 2013 by LighterThanAirSociety 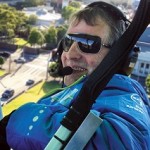 Airship pilot Haimo Wendelstein reflects on one of the mellowest forms of flying.

The year 2013 has been the 150th birthday of Bayer (makers of aspirin and more), and to celebrate, the company has been sending a hot-air airship to tour the world and promote the brand. With a 65-horsepower Rotax two-stroke engine in the tail to provide forward and reverse thrust, the airship has a leisurely top speed of 25 mph. Senior associate editor Perry Turner talked with one of its pilots, Haimo Wendelstein of Germany, in September.

Air & Space: How did you get into flying lighter-than-air craft?

Wendelstein: That was in 1983, when I started to help the general manager of a children’s village in the south of Germany to do charity balloon flights all over the world. I was a crew member. He [the general manager] asked me several times to get the license, but I always postponed it until 1992.

What qualities in your personality make you suited to flying hot-air airships?

Wow, that’s a difficult question to answer. Many people say about me that I always keep my calm and that I am very prudent. Also I was told that I have a “dry” humor. These capabilities keep me out of problems in the air.

What’s the closest you’ve come to encountering a problem in an airship?

That happened some years ago in wintertime in the Alps. Weather sunny, forecast okay. After 20 minutes flying, a hard gust pushed the airship down, until it hits the ground. I deflated immediately.

The wind in the upper region picked up quickly, and that causes the gusts in the valley. It was hard work to get the airship out of a field with two-meter-high snow.

Have you ever had a passenger have a bad reaction—fear of flying, airsickness, anything like that?

A very few passengers have some fear of heights, or they are uncertain about the open gondola without a windscreen or a door. But it takes only minutes until all fears will disappear. Flying in an airship is a totally different feeling, a kind of floating in the air, slow, not aggressive, no fast climbing or descending.

What other airship piloting experience did you have before taking on the Bayer assignment?

In the years before, I flew with different hot-air airships all over the world: North America, South America, Asia, and of course nearly in every country in Europe.

When you fly a hot-air airship, do you have another crew member aboard?

Normally a hot-air airship can be flown by one pilot, but for Bayer I have a copilot on board; this is a Bayer policy. And if I have to fly passengers, I need one extra crew to handle the passengers. Passengers must change [enter and exit] one by one. They have to wait until the air inside cools down; otherwise the airship will disappear in the stratosphere. They need help with seat belts and headset, and they must approach the gondola only from the front side to avoid contact with the propeller. Most of the passengers are excited and want to make pictures, so it is really necessary to guide them.

For the pilot, are there a lot of tasks to handle at once?

Flying an airship, in my opinion, is like driving a car. There are many things that you have to do at the same time, but once you get used to it, you do not think about every single step.

What have been some of your favorite places to fly over?

Every place has its own charm, but there are still some that I remember clearly—for example, Malaysia. This country is near to the equator, and has a tropical climate with huge cumulonimbus, thunderstorms, and heavy rain showers every day. 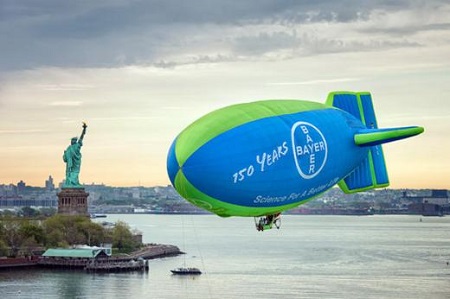 A few months ago I flew around the Statue of Liberty, which is really spectacular.

Do you ever think about learning to fly a powered aircraft?

Never. I have enough to do with airships. Hot-air airships are a quite “young” type of aircraft, and I am interested to help make them better, together with Gefa-Flug, the only manufacturer of hot-air airships worldwide at this time. Of course, hot-air airships have also an engine with propeller [for thrust]. With 65 horsepower the engine is not very powerful, but they are still powered aircraft, I think.

Fantasy time: What would make the perfect hot-air airship?

The first step is a more powerful engine – let’s say for the beginning, 100 hp, which allows more speed, means flying in more wind. The time for the cold inflation could be a bit shorter. Another thing is the lifetime of the envelope fabric, which could be more than around 450 hours.

What other types of (non-airship) aircraft have you flown?

None. To fly hot-air airships it is necessary to have a hot-air balloon license with a rating for hot-air airships, but I didn’t make many balloon flights, because flying airships is much more interesting for me. 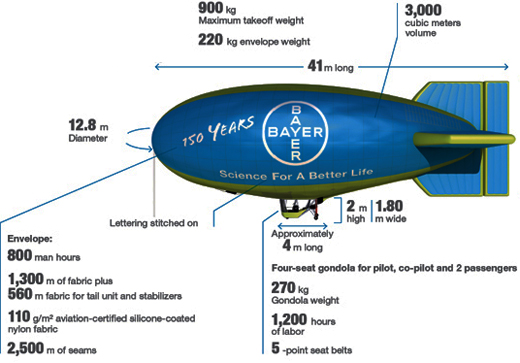 The airship can fly at a top speed of 40 kilometers per hour, in winds of up to 12 knots.
Graphic: Bayer AG

The beauty of Switzerland, seen from the Bayer Airship.