Stéphane Rousson and his pedal-powered dirigible

Posted on March 4, 2018 by LighterThanAirSociety 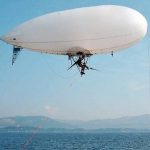 As he flew over the yacht masts at Villefranche-sur-Mer, Stéphane Rousson could have been mistaken for an intrepid aeronaut on an ancient contraption. His machine, however, is aimed at a future of fuel-free airships. 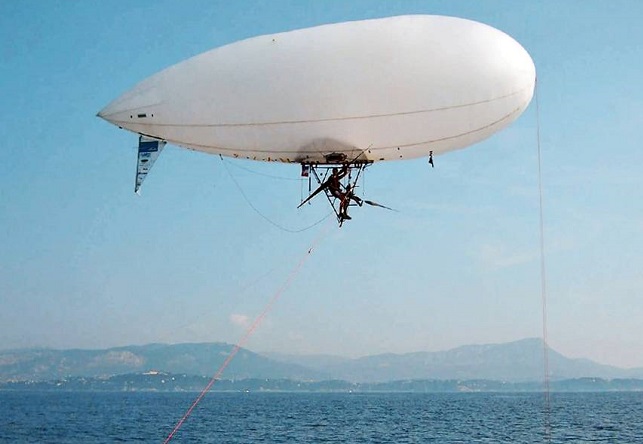 The cyclist looked like someone from the Edwardian era as he pedaled through the early morning sky just off the French Riviera.
Source: The Sunday Times

Mr Rousson, 48, who has been flying small steerable balloons for 15 years, was allowed to test his dirigible along the Promenade des Anglais, the seafront Nice boulevard, last month. A rising wind forced him back to land because a human, driving propellers, cannot pedal the 60ft-long helium balloon, the size of a bus, against winds of more than about 3 mph. 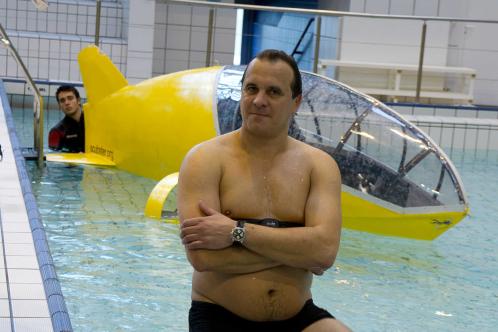 “Muscle-powered flight is truly magic,” Mr Rousson said. “You’re weightless under a bubble of gas and you have to control it. It’s like being lifted by 100,000 children’s balloons. But as well as that it has a lot of use.”

The inventor believes that his ships, if he can make them work, could be used for surveillance missions. The abortive Nice outing did not dim his spirits. Previous setbacks have included ditching in the Channel off Calais after pedalling 22 miles from Kent in June 2008.

Mr Rousson, who trained as an airline pilot, has devoted his life to his dream of reviving the dirigible, the lighter-than-air craft that peaked with the Zeppelins of the 1930s. In the autumn, he hopes to fly 110 miles from Nice to Corsica below the “Aérosail”, a prototype airship that can sail like a boat thanks to a “keel” that it pulls through the sea. 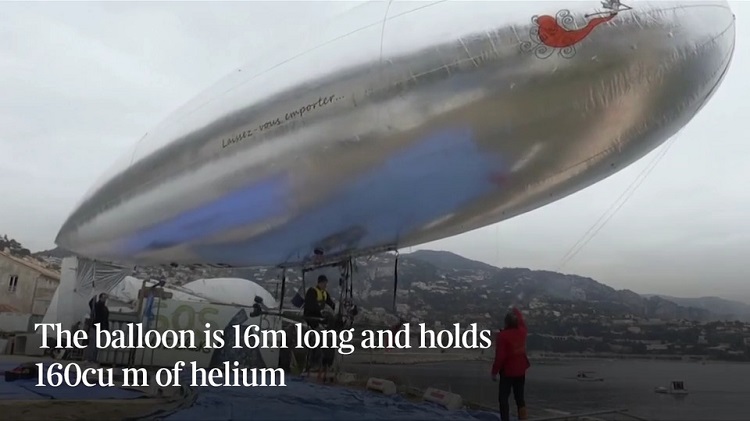 Using wind power is impossible for free-flying conventional balloons which are carried by the air in which they float. Aerofoil technology, developed for racing yachts, has opened the way to tethering craft to a lightweight fin that gives it purchase in the sea.

“The balloon goes where I steer it,” Mr Rousson said. “I sail it like a boat, tacking with the wind. There won’t be pedals. Just my armchair and the hydrofoil in the water.” 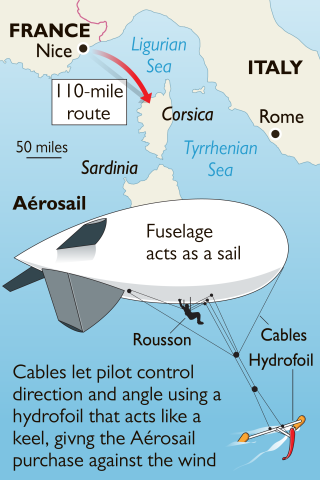 The technique has been pioneered with kite surf wings, enabling people to fly tied to a foil in the water that acts as the keel. “We’re putting everything into the air and leaving only the keel in the water,” he said.

Mr Rousson uses the pedal airship, developed from a 2002 French design, to test ideas and give displays. “It serves no purpose apart from making children and adults dream,” he said. “But what we have learnt from the low-powered dirigible is that it could have a lot of civilian and military uses.”

He acknowledged that piloting the unwieldy balloon is tricky. Balloons expand and shrink with changes in temperature and pressure. “You have to balance a bubble of gas that is moving all the time,” he said. “You only need a ray of sunshine that’s a little stronger and all the lift is modified.”

Mr Rousson, known in France as a “fou volant” — flying madman — convinced the French civil air authority that his bicycle-powered vehicle is airworthy. He was cleared for aerial navigation below 170ft. At home in Nice, he talks to air traffic control at Côte d’Azur airport, the third biggest in France.

The concept of his sailing airship was tested when Nicolas Hulot, President Macron’s environment minister, got as far as Cap Verde, off Africa, during an attempt to fly the Atlantic in 2002.

Mr Rousson and his team of enthusiasts are struggling now for sponsors to pursue the next stage of their dream.