Posted on December 18, 2013 by LighterThanAirSociety

The next generation of the tire company’s iconic airship has historic roots. 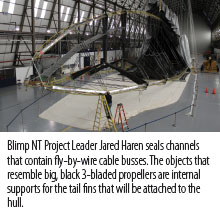 The Goodyear Tire & Rubber Company is assembling an airship that utilizes new technology at the company’s Airship Operations base southeast of Akron, Ohio.

The first components of the new airship, which will be used for public relations, were hoisted into place in late March 2013, and now the structural framework of the ship’s 246ft-long hull is nearly complete, with the fabric envelope beginning to be pulled like an enormous sock over the girders.

Unlike the current blimp fleet that depends on internal pressure of the lifting gas to maintain aerodynamic shape, the new airship keeps its form with the help of a rigid structure as well as the pressure of the helium gas held inside a high-tech fabric bag.

What’s in a Name?

The new airship technically will not be a blimp in the strictest definition of the word because of its rigid internal structure.

“We recognize for those who are purists that this is not a blimp,” explains Eddie Ogden, PR manager for an older model blimp, Spirit of Goodyear. “We like to call it Goodyear Blimp NT. It’s a popular name that we don’t see the general public wanting to change.”

The term Blimp NT (for New Technology) recognizes modern developments, since the German partner with Goodyear calls its similar airship the Zeppelin NT. It’s also a nod to tradition, since the word blimp retains the brand equity built up throughout 90 years of Goodyear public relations airship activity.

While the name will remain similar, the Blimp NT is quite unlike its immediate predecessors, and even substantially different from the Zeppelin NT airships currently in service in Germany.

Project Leader Jared Haren describes the vehicle as a hybrid semi-rigid airship, because it blends several established methods of airship manufacture with some entirely new features. The girders bear some resemblance to those used in the giant rigid airships of the early 20th century, such as the globe-girdling passenger airship, Graf Zeppelin. This should come as no surprise, since Goodyear’s partner is ZLT Zeppelin Luftschifftechnik GmbH & Co KG, the modern-day descendant of the airship manufacturing company founded by Count Zeppelin in Friedrichshafen, Germany, more than 100 years ago. But this airship is no historic replica; the girders are a modern mix of aluminum longerons and carbon-fiber trusses.

The Goodyear Blimp NT is expected to be the first of three. They will replace the trio of GZ-20A blimps now flying, which were designed 45 years ago. The Blimp NT (type LZ N07-101) is about 54ft longer than the current blimps, and will have an envelope volume about 45% larger.

Once completed, the NT may resemble a contemporary blimp from the outside, but that smooth fabric envelope (the gas bag) conceals a multitude of hardware underneath. The Blimp NT has an internal cable system as does Goodyear’s current GZ-20A type blimps. In those, the control car under the bag is supported by two fan-like networks of steel cables that run inside the envelope, from near the top to the bottom. In the Blimp NT, Kevlar cables brace the girders.

The triangular cross-section longerons of the Blimp NT are made of 7020 aluminum. Metal is preferred in these pieces because of its ability to handle twisting and bending, Haren says, while carbon fiber is used in the transverse frames because of its strength in tension and compression. Also, the composite girders are lighter in weight than similar structures made of aluminum. Looking like two big, black, three-bladed propellers inside the hull are composite beams to support the three tail fins. An added safety feature of the black composite beam material is that, if damaged, it shows a tell-tale white color at the site of the fracture as a visual indicator, according to Haren.

The bright yellow tail fins waiting to be attached to the frame are also made of composite materials, and weigh 360 lb each, says Brad Crombie, project engineer/manager at the Goodyear Tire & Rubber Company. The new fins are made by Aerostruktur Faserverbundtechnik GmbH, which also is making the airship’s control car – the gondola – that will carry between seven and 10 passengers compared to the GZ-20A blimp’s five or six.

This Goodyear NT gondola will differ from its European counterparts in having revised cockpit instrumentation, says chief pilot Greg Poppenhouse. A Garmin GTN 650 GPS touch-screen navigation system and glass-cockpit avionics suite will be new to the Blimp NT. Barco Aerospace Solutions will provide the engine indicating and crew alerting system – a CHDD-268 cockpit head-down display – and processing units for the updated instrument panel. The panel will indicate fuel status and water ballast.

Also new for the Goodyear version of the airship, the flight controls will be duplicated for left- and right-seat pilots. A fly-by-wire side-stick controller on the new airship replaces the muscle-powered rudder pedals and the large elevator wheel used for pitch control on GZ-20A blimps.

The Blimp NT’s sleek outer envelope – the bag that contains the helium lifting gas and serves as a weather barrier – is made of polyester fabric with a laminated Dupont Tedlar film. This is a departure from the Dacron/Neoprene fabric used for blimp bags now. Made by ILC Dover in Delaware, the envelope for the new Goodyear airship differs in one remarkable way from the white titanium-pigmented covers for all the other NT airships built thus far: Goodyear’s is tinted a subtle shade of gray, to carry forward the silvery-gray appearance long associated with the company’s blimps.

More than 4,500 fasteners resembling cable-ties are needed to attach the envelope to the frame, and all will be applied by hand. To regulate gas pressure inside the envelope, the Blimp NT will have ballonets – internal air bladders – mounted in the hull near the airship’s nose. However, unlike the earlier NTs, Goodyear’s NT airships will have not one, but two ballonets mounted one above the other in the airship’s stern. Haren explains the reason: A blimp operating in the southwestern U.S. would require additional helium to be added at night when it’s colder to maintain the airship’s pressure, then vented the next morning when heat expands the gas volume beyond what can be contained. The extra volume of air will help accommodate the wide temperature swings without the need for additional helium.

Haren says that the Blimp NT project is dubbed Full Circle, since it reunites the historic partners Goodyear and Zeppelin that teamed to produce the gigantic Navy dirigibles Akron and Macon in the 1930s. The Blimp NT construction team consists of Americans and Germans, averaging about 10 in number. They have learned to appreciate each other’s skills and the significance of what they are doing, Haren relates.

“The camaraderie was great between Germans and Americans back in the 1920s and the ’30s – and it still exists,” according to Haren.

The airship is expected to fly in early 2014; the next milestone once the gas bag is fitted is attaching the control car, fins, and engines. Subsequent Blimp NTs are expected to be completed in 2-year intervals to replace the remaining GZ-20As. 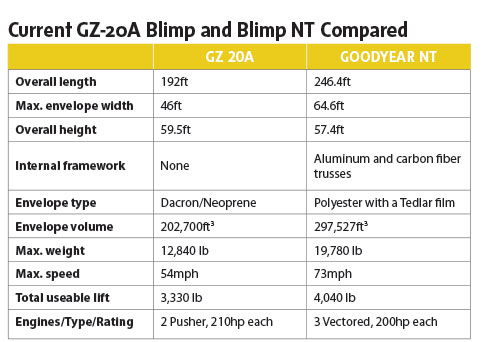