Posted on January 9, 2019 by LighterThanAirSociety 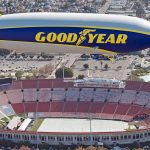 Honoring the aircraft that helped popularize football, and revolutionized advertising in the process

Over its 94 years of flying around the United States, the Goodyear Blimp has arguably contributed as much to keeping football in Americans’ hearts as radio and television broadcasting. The company estimates its blimps have covered in excess of 2,000 football games to date, from long-forgotten collegiate romps all the way to the Super Bowl.

And today, football is returning the favor. 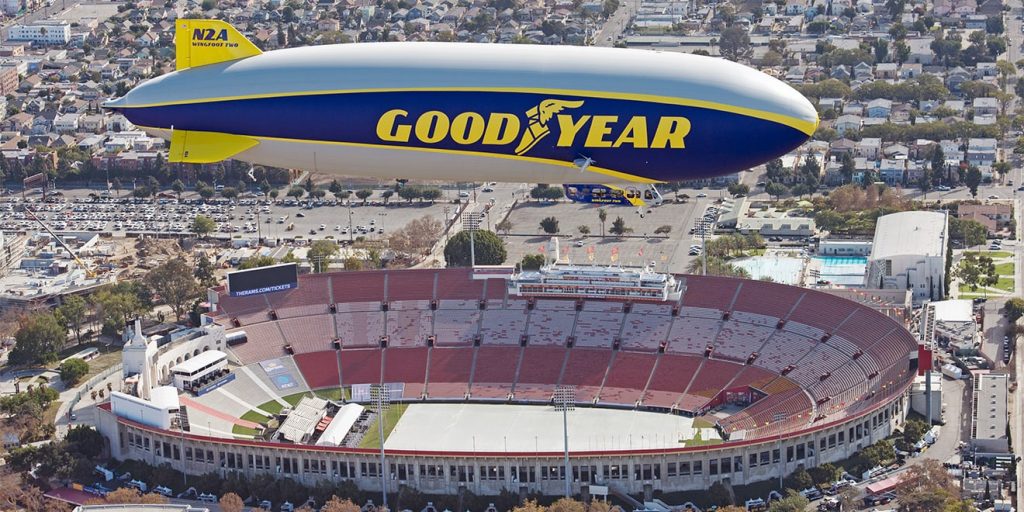 The Goodyear Blimp buzzes the Los Angeles Coliseum in 2017.
Photo courtesy of Goodyear

The College Football Hall of Fame in Atlanta is inducting the Goodyear Blimp as an honorary member. “Honorary,” of course, because this famous gasbag is not a football player or coach—not that that diminishes the gesture any.

“It’s not a stunt—this is a genuine induction to Goodyear,” said Goodyear’s general manager of marketing Todd Macsuga, adding that the company plans to install a full blimp exhibit at the hall of fame, complete with historic artifacts, photos and video, and even a VR component. “We have a full complement planned,” Macsuga said. “We’re excited about being inducted.” 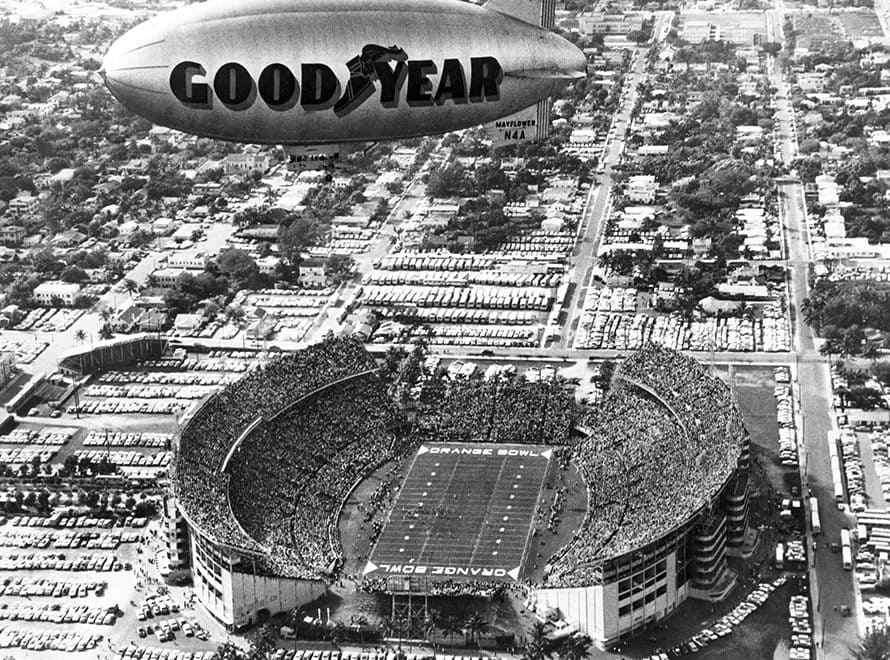 The blimp visits the Orange Bowl in 1962.
Photo courtesy of Goodyear

Operated under the auspices of the National Football Foundation, the College Football Hall of Fame is a shrine to the legends of the college gridiron. NFF president and CEO Steve Hatchell said that for many players, a game played in the shadow of the blimp is a sign that they’ve truly arrived.

“For players and fans, the Goodyear Blimp has really come to represent the biggest stage in college football,” Hatchell said. “When the blimp shows up, you know it’s a big game.” 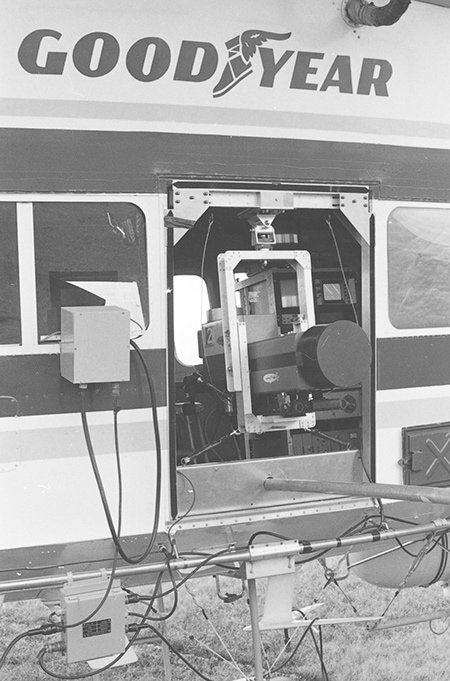 A TV camera pokes out of the gondola door (1975).
Photo courtesy of Goodyear

Actually, when the blimp shows up, you know that it’s a big opportunity for Goodyear, too. Because, while the blimp’s cameras offer fans at home unparalleled aerial views, fans at the game can’t fail to notice the brand name when they look up at the blimp. Indeed, were there such a thing as the Aerial Advertising Hall of Fame, the blimp would surely have been inducted into that, too.

“As a brand vehicle, it puts the Goodyear name out there in a way that can’t be done by any other organization,” Macsuga said.

That kind of quid pro quo—an airship adding excitement to an event while disseminating its own corporate image in the process—has been part of the Goodyear formula almost from the very start.

Goodyear began building blimps for the U.S. Navy in 1917, launching its first commercial craft, the Pilgrim, eight years later. While there was early talk of promoting blimps as “air yachts” for the landlocked affluent, Goodyear quickly recognized the head-turning quality of its airships as a marketing and PR goldmine.

The company loaded Santa Claus into the gondola of its first blimp in 1925, dispatching him to deliver toys to wide-eyed youngsters. By 1930, Goodyear had fitted its latest blimp, the Defender, with six-foot neon letters that allowed the Goodyear name to glow as the ship flew across the night sky. 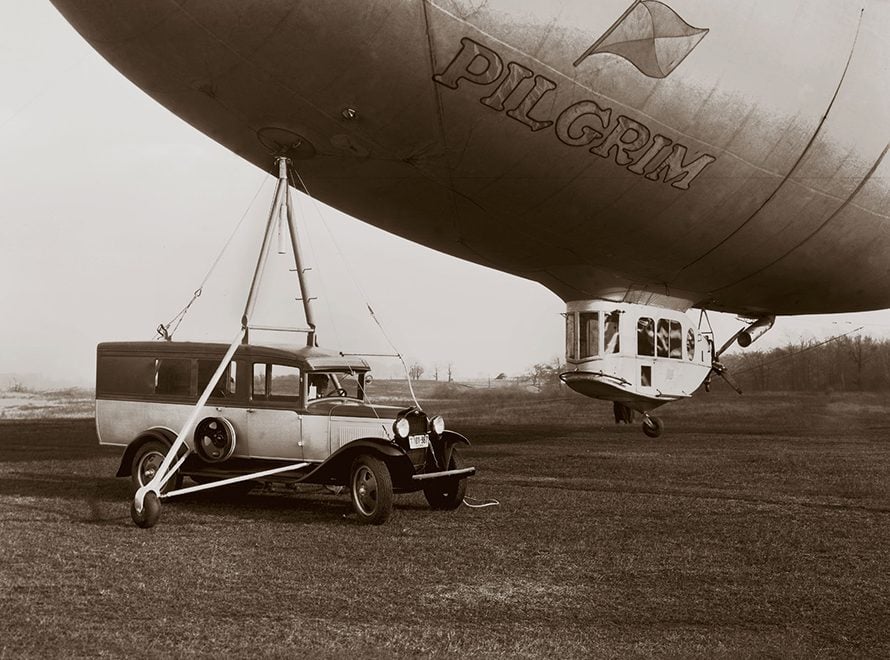 Goodyear launched its first commercial ship, the Pilgrim, shown here with its motorized mooring mast, in 1925.
Photo courtesy of Goodyear

The blimp began its football game duty in the years after World War II, and its thousand-foot vantage gave television producers the sort of dream shots that must have felt like science fiction. On Jan. 1, 1955, the Goodyear blimp Enterprise V pioneered the live TV aerial shot as it drifted over Pasadena’s Tournament of Roses Parade. Later that afternoon, the gondola-mounted camera furnished shots of Ohio State trouncing the University of California at the Rose Bowl.

“The blimp revolutioniz[ed] the way fans experience the game,” Hatchell said. “The Goodyear Blimp was the first to provide aerial coverage of a major sporting event.” 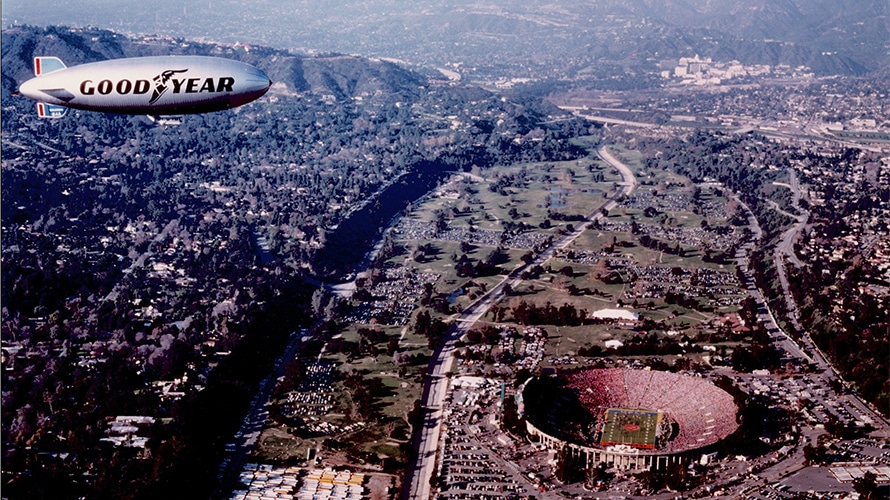 When UCLA played OSU at the 1976 Rose Bowl, the blimp was there.
Photo courtesy of Goodyear

A little more than a decade later, the blimp set a course for the pro leagues. When the Kansas City Chiefs faced the Green Bay Packers in the very first Super Bowl in 1967, the Goodyear Blimp Columbia was on hand. And by the 1970s, Goodyear’s blimps were appearing at the biggest sporting events in the country, from the Indy 500 to PGA golf tournaments to the Kentucky Derby.

More recently, digital technology has made the atmosphere feel a bit crowded, with cable-suspended Skycams and drones now furnishing some of the bird’s-eye views that were once the exclusive domain of the trusty blimp. But Goodyear still invests in its fleet of blimps. (Actually, they’re not even blimps anymore. Since 2011, the Goodyear ships have been manufactured with a supportive framework inside the gas envelope, technically making them semi-rigid dirigibles.) The company continues to dispatch its airships to major happenings across the country.

A good many of those events are, of course, football games. But Macsuga said any event, professional or amateur, big or small, benefits from the tingle in the air that a blimp overhead invariably brings.

“When a blimp shows up at an event,” he said, “I don’t care if it’s a national championship game or a sea otter festival – it’s a big deal.”