I’m Building Airships to Fly over the Amazon

Posted on May 16, 2015 by LighterThanAirSociety 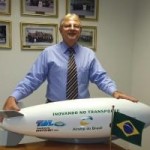 What gave you the idea for using airships to transport cargo in the Amazon?
I was a lieutenant in the Brazilian army in the 1980s and I saw the difficulties of moving equipment around in the Amazon, especially for platoons working in densely forested border regions. The army has a long tradition of using balloons and airships for border surveillance.

What advantages do airships offer?
The Amazon is a very harsh environment and transporting heavy cargo by land is a Herculean task. Waters rise and fall annually and roads get flooded and erode, or get buried in mud. In order to cross streams and rivers, many roads are connected by small ferries. Air freight and river transport are options, but the first is very expensive and the second is very slow. Airships are cheaper than planes and faster than boats.

And environmentally friendly, presumably…
Absolutely. To transport heavy equipment you need surfaced roads from departure to destination, and to build those roads you need to clear the path, tearing down vegetation and disturbing all the wildlife. Roads are terrible for the Amazon’s ecology. They are also colonized by people who further disturb the forest with agriculture and hunting. Airships need very little in the way of infrastructure, and ours will be able to stay afloat for up to 20 days without refueling. They are also much less polluting than planes. 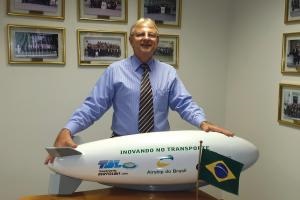 Tell me about your airships.
Our first semi-rigid, crewed airship – a 3-ton-payload version – will be completed in the coming months. We will then build a fleet of larger airships, each capable of carrying 30 tons. These craft will be 140 meters long and 60 meters tall, with a top speed of between 80 and 120 kilometers per hour.

What will you use your craft for?
Reduced dependency on ground infrastructure makes airships ideal for transporting heavy equipment in difficult and fragile regions. For example, our airships could carry hydroelectric turbines, towers for high-voltage power lines or blades for wind turbines with minimal disruption. Lower-impact logging is another possibility.

What kinds of challenges have you faced?
The biggest challenge is overcoming people’s fear. When people think of airships, they tend to think of disasters: the explosion of the hydrogen-filled Hindenburg in 1937 and the British R101 on its first overseas voyage in 1930, for example. Our airships are filled with helium, which is neither flammable nor explosive. And the materials we use are composite, plastic-like components that do not attract lightning. We are convinced they are safe.

Will the airships entice tourists?
Airships offer excellent views of the forest and rivers. We are not focusing on tourism, but we may develop something for the Olympics in Rio de Janeiro in 2016. We’ll have airships ready by then.

Engineer Marcelo Felippes is the institutional director of Airship do Brasil, based in São Carlos, near São Paulo, Brazil, which develops lighter-than-air technology. He is an authority on jungle logistics.

Animation of the proposed airship:

This entry was posted in Airships, Semi-Rigid and tagged airship, Airship do Brasil, dirigible, Semi-ridgid airship. Bookmark the permalink.