Airships Are Coming to the Middle East

Posted on November 25, 2017 by LighterThanAirSociety 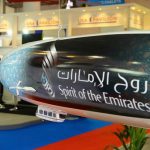 Two projects that would bring airships to the UAE for tourist sightseeing with a difference are being discussed here at the Dubai Airshow.

On Stand 1697, the Spirit of the Emirates is displaying its ambitious plan to bring a huge Zeppelin airship here next November. On Stand 362, Airships Arabia is explaining its plan to bring a smaller Skyship 600 here within the next few months.

The Spirit of the Emirates is the brainchild of Khalid Ahmed Al-Ansari, an Emirati who has gained the support of the UAE’s Establishment for Small and Medium Projects. He is the local agent for Zeppelin Luftschifftechnik (ZLT), the German company that revived the famous name from airship history by building New Technology (NT) semi-rigid versions. ZLT flies them from its base at Friedrichshafen, usually on pleasure flights over Lake Constance carrying up to 10 passengers.

Khalid plans to bring one of these 246-foot-long machines to the UAE for a winter season of potentially more than 1,500 flights from both Dubai and Abu Dhabi. From 1,500 feet, tourists will get a spectacular view of the UAE coastline and—equally significant—they will also enjoy augmented reality interpretations of the scenery unfolding below them. ”This application is one of a kind and exclusive to the Spirit of the Emirates,” claimed Khalid.

On the stand is a diorama of the longer-term plan to build a fancy base and hangar for the airships. When AIN visited with Khalid, various UAE Air Force officers were showing interest, and Khalid says that there could be intelligence, surveillance and reconnaissance (ISR) applications for these airships too.

The founder of Airships Arabia, Gregory Gottlieb, knows quite a lot about the ISR potential of airships. In a previous career, he was a UK Army officer responsible for the operation of a British-built Skyship airship over Northern Ireland monitoring the movement of republican terrorists. After moving to this region, he consulted on and built tethered aerostats for ISR missions.

But, as Gottlieb noted, “There has never been any type of airship in the Middle East.” He has sourced one of the eight remaining Skyships and plans to employ it here on advertising and surveillance work, as well as tourist flights. As this issue of Dubai Airshow News went to press, Gottlieb was hoping to announce some significant local financial backing for his company.

Longer term, Airships Arabia expects hybrid airships to become its core business. “Once they are type-certified, they will offer a disruptive, inexpensive, highly flexible and adaptable alternative to both surface and aerial transport modes,” said Gottlieb.