Posted on June 9, 2015 by LighterThanAirSociety 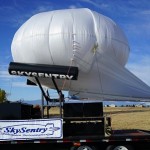 The Colorado Department of Transportation this week will be test-flying a helium-filled blimp above Interstate 25 north of downtown Denver to monitor traffic.

Several cities and transportation departments across the United States have considered the use of an aerostat — the technical name for the floating device that’s a cross between a balloon and a kite — for traffic monitoring, but CDOT said it’s the first transportation agency in the country to test-fly the technology.

“We’re testing and piloting all kinds of things,” said CDOT spokeswoman Amy Ford. “This [the blimp’s test flight] is about the data and information we can get that we can share with the public.”

CDOT is testing an aerostat made by SkySentry LLC in Colorado Springs. 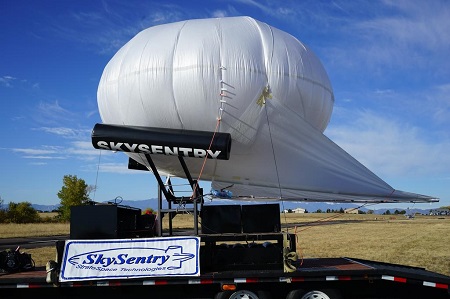 The “Tactically Expedient Aerostat,” or TEA, made by SkySentry LLC in Colorado… more
Photo courtesy of SkySentry LLC

The company, founded in 2003, has flown its aerostats for CDOT to take pictures of the rocks above the state’s highways. The pictures are reviewed to find areas where the rocks may have shifted and increased the chance of a rock slide, said retired Col. Charlie Lambert, SkySentry’s president and CEO.

The latest use, monitoring traffic in metro Denver, has been in the works for about a year, Lambert said.

Starting Tuesday, CDOT will conduct a three-day test of SkySentry’s “Tactically Expedient Aerostat,” or TEA, a 1,600-cubic-foot device to monitor traffic at I-25 and 70th Avenue.

The blimp will be flown to heights up to 400 feet to test how it works carrying CDOT’s cameras and transmitting information using the agency’s existing fiber optic network, CDOT said.

“We don’t have cameras that can cover everything and they’re limited by what they can cover — by height, location and where they can turn,” Ford said. “If we can get higher, we may be able to get a clearer picture of the traffic environment and how it fits together.”

If the test flight is successful, CDOT might get better information and reduce the number of traffic cameras it operates, the agency said.

SkySentry has used its aerostat’s in a wide range of operations, including supporting the U.S. military in Afghanistan, according to SkySentry’s website.

The blimps also are useful in the agriculture industry to monitor crops and see if there are areas that are under stress from insects, need more water or have received too much fertilizer, Lambert said.

And for those worried about someone taking a potshot at the blimp, SkySentry’s website notes that small arms fire has “minimal impact” on the device because the air pressure differential between the inside and outside of the blimp is less than one pound per square inch.

That means “Bullet holes allow very slow helium leakage, with consequent graceful degradation. The TEA is simply retrieved and the holes are patched for the next launch,” according to the website. 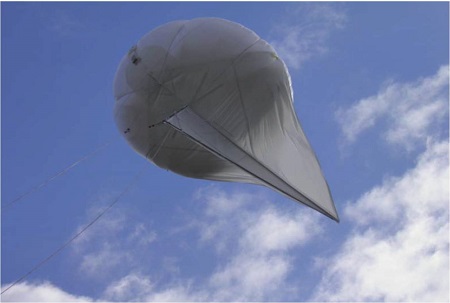