Ohio buys ‘blimp in a box’ for surveillance 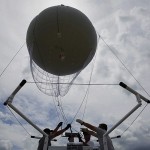 The state has a new eye in the sky, and its first mission could be to keep watch over two Warren County prisons.

The Ohio Department of Transportation spent $180,000 on a “blimp in a box” that officials say could be used by a number of state agencies.

The device is a tethered, unmanned helium balloon that monitors an area via cameras for as long as three days at a time.

After the blimp is deployed from a trailer-mounted box, a tether connects it to a ground-control station and transmits power and video cables. The system includes a smaller balloon — 10 feet in diameter — that can take pictures but not video and does not need a trailer. 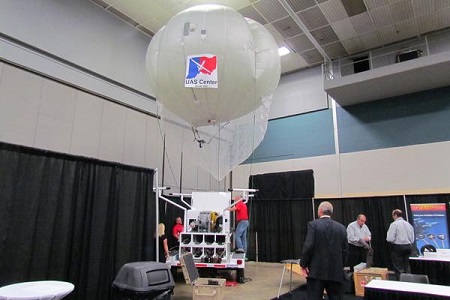 The Ohio Department of Rehabilitation and Corrections tests a tethered balloon equipped with a sensors attached over the Lebanon and Warren Correctional Institutions.
Photo courtesy of Tristan Navera – Dayton Business Journal

Drone Aviation Corp., owner of the Florida-based developer Lighter than Air Systems, delivered the system last month to the Ohio/Indiana Unmanned Aircraft Systems Center in Springfield, which falls under the transportation department. It is the first aerial device purchased by the state for use at the test center.

The center is testing and evaluating the blimp while working with state agencies to identify their needs and schedule the balloon’s use, said director Dick Honeywell.

“I would expect to see multiple agencies using this asset across the state for various projects,” Honeywell said. “We’re just going to use it as productively as we can.”

Some possible uses include surveying and perimeter security for prisons, Honeywell said.

Several Ohio Department of Rehabilitation and Correction employees from Lebanon and Warren correctional institutions were at the test center for training last month.

“We’re undergoing an operational assessment to determine if using this type of technology would be effective in enhancing the safety of the surrounding community, as well as the safety of our facilities,” said agency spokeswoman JoEllen Smith. 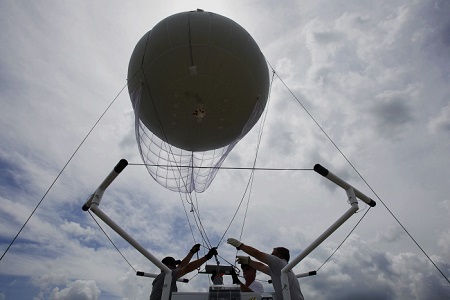 The blimp could help prevent visitors from tossing contraband onto prison grounds and help monitor inmates who are authorized to work outside the prison.

“As technology advances,” Faulkner said, “there’s the cost savings when you look at using a device like this rather than flying a plane up in the air at 10,000 feet full of jet fuel.”

ODOT contacted the Federal Aviation Administration before the purchase to ensure that the blimp complies with regulations, said FAA spokeswoman Elizabeth Isham Cory.

It also cannot be operated within 5 miles of an airport, and it can’t be used when ground visibility is less than 3 miles. It must have markings and lights for visibility, as well as an automatic deflation device in case the blimp breaks free from its tether.

Its camera can see individuals as far as 3 miles away and groups of people or vehicles as far as 5 miles away, Carpenter said. It is designed with image stabilization.

Depending on the crew, it takes 20 to 45 minutes to deploy the blimp, Carpenter said.

This is the second unit sold in the United States for non-military use, Erdberg said.

The Metro Nashville Police Department purchased a blimp in a box in 2008 for use at large events such as the Country Music Association Festival and the Rock ‘n’ Roll Marathon, said police spokeswoman Kris Mumford.

The blimp also was used to help prevent theft at a rail yard in the city, she said.

“The possibilities,” Faulkner said, “are almost limitless in some regards.”