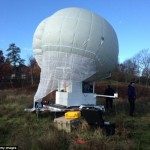 Pennsylvania police have deployed a $180,000 “blimp in a box” — a tethered helium balloon equipped with cameras — to search dense woods for suspected cop-killed Eric Frein, who has been on the run for six weeks. The experimental gizmo is on loan from the Ohio Department of Transportation, which bought it over the summer. Police say it could be useful in the search for Frein because it’s silent, while helicopters are noisy, and it’s much less expensive to use. 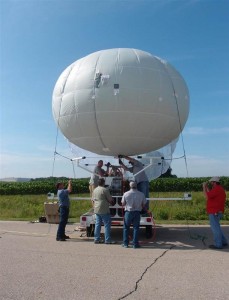 Pennsylvania police have deployed a $180,000 “blimp in a box” to search dense woods for suspected cop-killed Eric Frein.
Photo courtesy of NBC News 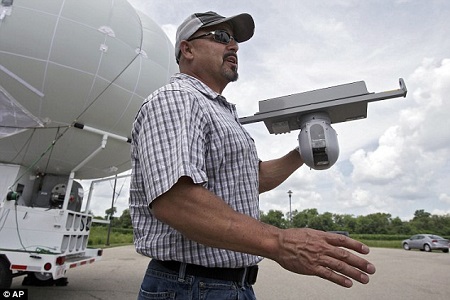 Similar to a weather balloon, the blimp can hover silently in the air for up to three days at a time, while capturing video footage. Above, an official shows off one of the device’s heat sensors.
Photo courtesy of The Daily Mail

Drone Aviation Corp., which developed the blimp, said it’s designed to fly up to 1,000 feet in the air, though federal aviation authorities must be notified if it goes higher than 500 feet. “It can stay up for several days at a time,” said Dan Erdberg, the company’s chief operating officer. It’s equipped with two cameras — one for day, and infrared for night. “It looks anywhere you want,” Erdberg said. 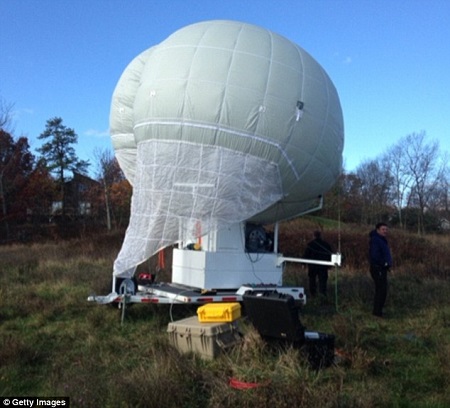 Pennsylvania State Police are using this $180,000 ‘blimp in a box’ to track down Eric Frein, who has been on the run in dense woodland in the Pocono Mountains for nearly seven weeks.
Photo courtesy of the The Daily Mail

Ohio sent two employees to Pennsylvania with the balloon, “Maneuvering the system itself can be tricky,” said spokesman Steve Faulkner. “It works great under great conditions. When it gets to be windy, there are some drift issues that make it tricky to operate.”

Investigators believe Frein is hiding out in the woods on the border of Pike and Monroe Counties, where they found a campsite and a diary in which he recounted shooting two state troopers at the Blooming Grove barracks on Sept. 12. Frein, who is on the FBI’s most wanted list, is a military buff and self-taught survivalist who allegedly prepped for the ambush and his escape for months. He allegedly booby-trapped one of his hideouts with homemade pipe bombs.